After all these years hiking, finally (not like I couldn't have waited longer) saw my first snake on the trail.  Actually two in as many days.

The first was a little more ominous in that we didn't notice it slithering toward us till just the last minute as we were finishing up a quick granola break along The Wiccopee Trail in Fahnestock Memorial Park.  I'm no snake expert here (nor is it a new passion of mine or anything).  But after Googling and seeing wa-a-a-a-a-ay  more snakes than I care to, I'm guessing this is a Rat Snake. Solid black and looked like it had just been polyurethaned. At that moment, it seemed to me as being in the neighborhood of 10 yards long. But cooler heads and steadier camera hands realistically later gauged it more like 6 feet.  Uh..still quite long enough by my personal, acceptable  Snake-O-Meter standards. 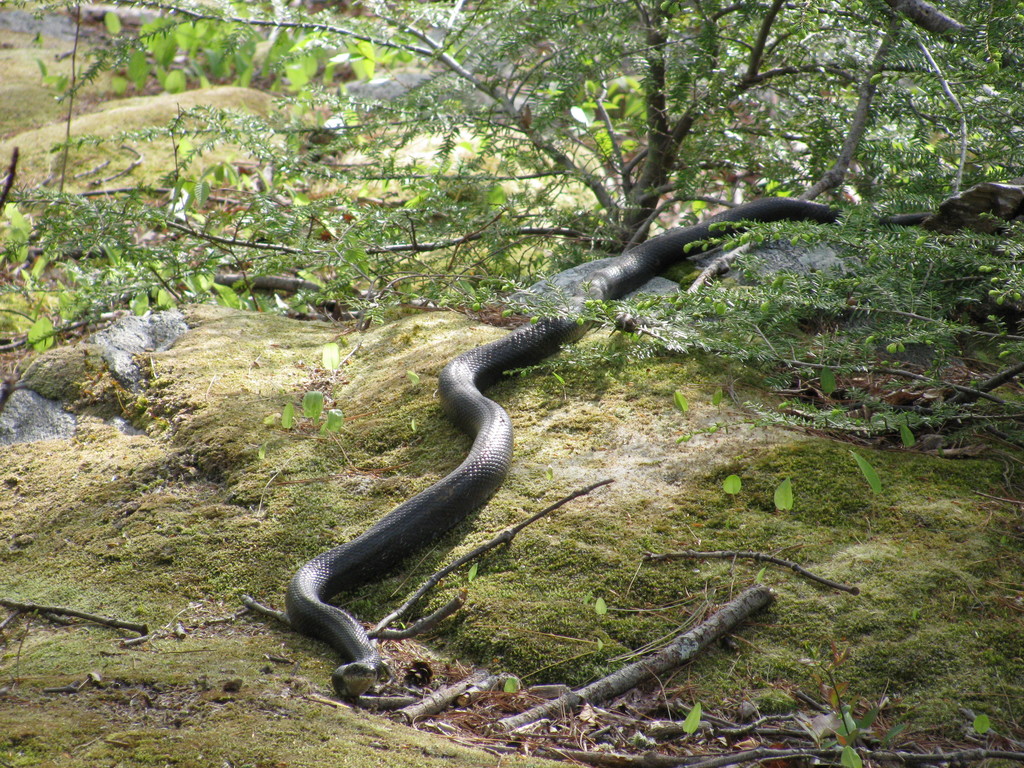 The other snaky encounter was less creepy, but more startling - for the both of us - since I nearly tripped over it as I was trodding along the AT also in Fahnestock the next day. It did its coil-like slither thing mere seconds before my foot would have either stepped on him or tripped over him. I'm a fast hiker but we're both fortunate than snakes be faster! :)

Actually kind of pretty. It looked like a much, much larger version of one of the hundreds of garter snakes I've had in my garden at home. Thinner than blackie up there,  striped and little less than 4 feet. It cocked its head and posed while I snapped away...now the brave snakespotter I'd become. Yeah.  Right. :( Since pride and (now) snakes goeth before me, I'd appreciate their correct i.d's. if anyone knows exactly what they are.   Wouldn't want to mis-label them in my photo library under "Critters I Have Encountered" or in their case "Critters-I'd-Just-As-Soon-Not-Have-Encountered".

Please tell me the larger black snake is not dangerous to humans because I see them all the time in Morristown parks and others......

Linda - Surprised you didn't stumble into any snakes last spring - they seemed to be everywhere. You got two nice photos of them too.

I believe you are correct, the large black snake is Rat Snake. They are not venomous nor aggressive to humans, and while I think they are supposed to have a painful bite, they don't pose any issue really. We see them all the time as well, in the 6-7' range, which is rather impressive (or startling, take your pick) when seeing that much snake slither away a few feet from you.

There are just two poisonous snakes in NJ, the Timber Rattlesnake and Copperhead. While it's rare to encounter them, we have seen rattlesnakes on several occasions. Just give any snake a wide berth - they don't want to be around you either.

The other snake may be a Eastern ribbon snake, but there are several that look like garter snakes and I get them mixed up. They tend to be suddenly underfoot and I've had to do a little two-step a couple times to avoid them. I find them kinda cute!

And the state has a snake ID sheet online too.

I think I'm going to pass out.  The Rat Snake I see all the time in the woods where I go mtn biking/hiking.  They are literally EVERYWHERE and I think multiplying.  I saw one down by a stream last year chasing a bull frog.  He got him and ate him.  I was amazing to watch.  I assume they eat Rats? (and frogs)

Linda, that rat snake looks about 10 yards long to me, you can't even see the other end of him!  I had one about that long run straight at me up the AT in NJ once.  Yes, RUN and FAST!  You would not believe how fast they can move. He made a sharp turn behind me just as it was registering in my brain what was going on and I did quite a leap in the air (I think that might have been accompanied by a little scream) as he exited the trail right behind my heels.  And I'm not at all squeamish about snakes - at least not when they aren't in hyper-drive.  Oh, and for future reference, rat snakes will sometimes mimic rattlesnakes and rattle :).

To get those pics, I'd need at least a 300mm lens on, as I'd have ran at least 25 ft away before composing myself to shoot a pic! I'm so bad that when I hike with my girlfriend I usually encourage her to "lead the hike", knowing that she'll clear the way of these critters (not to mention cobwebs ;-). Great shots Linda, sorry no clue as to ID though.

Just this last weekend, we found a black snake ( it had a little tan under the chin) about four ft long, sunning on a rock right across the trail. It didn't move a muscle as i stopped short just a step away from it. And it didn't move as the two of us walked around in front of it. It seemed quite content. That was on the S-BM trail in Harriman.

Last spring we disturbed a brown snake on the rocks near Green Pond in Harriman. That guy actually hissed at us-I guess he was not so content.

Has anyone noticed if there has been an increase in rattlesnake populations in NJ? After years of hiking without seeing one, in the past two years I have seen four. Are there more of them now, or was it just my turn??

I can't help you out with id-ing them, but wanted to congratulate you on actually have the presence of mind to get pictures, and quite clear ones, too!  Glad you all (snakes included) made out ok in the end :-)