The Appalachian Trail parking lot for High Point State Park seemed to come up faster than I remembered. I also didn't remember the lot being as large or paved. Plus reaching the AT was not as described in any of the hike directions. Turns out (I confirmed this with a park ranger who was checking the lot as I finished hiking) it was not my bad memory, they had, in fact moved the parking lot which changes how you reach the AT.

Heading north on Route 23, you turn left into the AT parking… Continue

Hiked the Ringwood-Ramapo/Hoeferlin/Pierson Ridge Trails Loop from Skylands Manor. When I arrived at 8:15 am it was a hopping place with several hikers and mountain bikers already there. I had hiked a different section of Ringwood State Park a couple of years ago (by Shepherd Lake) and don't remember hearing the shooting range but this time it was constant gunfire for about the first 2 and last 2 miles of… Continue

Headed over to Ramapo Mountain State Forest to check out a newer trail, Wanaque Ridge, in the western part of the park. We slapped together a route as we went along and ended up only with 7.2 miles, but there was a decent amount of up and down along a pretty rugged trail surface. It was a brrrrisk and dreary day, so we plan to come back to take photos when it's more colorful.…
Continue

8.1 challenging miles and 70 degrees, sunny and perfect... such a nice change after this crazy winter. We hiked in the northern section of Norvin Green State Forest, located to the southwest of Monksville Reservoir in West Milford. There are two newer (2008-ish I believe) trails there we wanted to check out, Lake Sonoma and Overlook.

This isn't a really long hike but with a decent amount of rugged up/down, several stream crossings, we'd rate it… Continue

This hike is a good choice for NJ hikers if you want some great views, don’t want to drive too terribly far and aren’t in the mood to battle Garden State Parkway/NJ Turnpike/I-80 weekend traffic. From Clark, NJ (GSP exit 135) the drive was 1 hour and 15 minutes to reach the Wind Gap, PA AT parking lot taking I-78 west where traffic tends to be decent on weekends both in the morning and afternoon.… Continue

We went in search of the Pygmy Pines in a section of the pine barrens called the "Pine Plains" where the trees average 5 feet tall and you can see over tree tops for acres.

We've never hiked Penn State Forest before and didn't know much about it, other than seeing a few pics of the pines, and they are mentioned in both an older (1998) "50 Hikes in NJ" book as well as a 2009 "Hiking in NJ" book and sounded… Continue

I arrived at Monmouth Battlefield State Park at 8 am and it turns out the park does not open until 9 am so the gates were closed. However, there are about 6 parking spots off to the right before the gate where an early morning jogger had parked so I left my car there and walked in. I had picked up a Monmouth Battlefield map a while back while at Cheesequake State Park so fortunately I had one. I never got close enough to… Continue

I had previously hiked Wharton State Forest from Batsto so I hiked from Atsion this time. I found the main differences to be that the trails from Batsto follow sand roads too much for my liking but there are a lot of water views. The Atsion trails are virtually all packed sand and pine needle trails through pine forests with minimal sand road but also minimal water views. The 10 mile Atsion hike was… Continue

When I checked the snow depth maps it looked like there should be 1 inch of snow along the shore where the rest of the state was buried in snow. Sure enough, I found there to be no snow to 1 inch and rarely maybe 3 inches deep for very short distances at Cattus Island County Park. There has been a lot of melting but there is a great network of boardwalks and trails raised with wood chips so for the most part your feet stay dry. There were… Continue

Greetings. Amusingly...one of the roughest parts of this hike was actually finding the trailhead. It took me nearly 4 trips back and forth on the same road to discover that the parking lot was neatly tucked away behind a sign for Greenwood Lake Marina. The beginning of the hike was pretty intense since it immediately begins to climb the mountain and doesn't level off until after 40 minutes...or maybe I'm just slow. The top of the mountain doesn't afford much of a chance for rest either, since… Continue

Park site here. There were maps in a kiosk at the main park office. Note on the building said the office is closed weekends until April 1st. We drove to the Pakim Pond parking lot a few miles down the park road. The composting toilet was unlocked (yay!). There is also a larger bathroom building there, which is seasonal. Another composting toilet was along the Orange trail later in the hike.

Decided to try our… Continue

Hiked the green and red trails at Michael Huber Prairie Warbler Preserve for a total of 9.5 miles. The kiosk had a supply of maps. It is the exact same map (even same size) as what is available online. Parking is probably along the road as there did not seem to be any space at the entrance but everything was snow covered, especially deep from plowing, so I parked across the street where there was some cleared space at… Continue

In case you haven't heard about the proposed plan, "The Susquehanna Roseland Project", here are a few articles about it, including 2 from the public meeting on Feb. 17th.

The plan would increase tower height and clear trees through the Delaware Water Gap NRA near Walpack Bend, and cross the Appalachian Trail before heading east across NJ.

"A big concern is the viewshed that will be negatively impacted by the new, taller towers. “While there is a powerline there today, the… Continue

There was more snow than I thought there would be at Mahlon Dickerson Reservation so I figured it would be a very short hike since the snow was not very trampled down but I did end up hiking 5.9 miles.

There were maybe a half dozen maps in the kiosk. The online map is good. I took the teal Highlands trail, which starts by the porta-potty in the Saffin Pond… Continue

Hiked around 7 miles at High Mountain Preserve Park in Wayne, NJ. There are two different maps online but I liked this one the best. I ended up giving my copy to a couple of guys who were lost going in the opposite direction when I was near the end. There is supposed to be a kiosk at the end of the parking lot (Lot 6 William Patterson College) but I did not… Continue

Hiked mostly all of the trails at Apshawa Preserve with only about 1/2 mile overlap for a total of 7.7 miles. This is a no hunting park. The online map is very good but differs slightly from the paper map, a huge supply of which were in the kiosk in the parking lot. The paper map is the more accurate one. The differences are the online map shows the white trail continuing north out of the preserve to a scenic… Continue

Had the day off and wanted to stay close since I hiked Walkway Over the Hudson/Franny Reese State Park on Saturday. (Didn't write that up since it is NY but if anyone is interested, let me know and I will.) Lewis Morris County Park is listed as having no hunting at all so I went there. Turns out they do now have some hunting days scheduled: 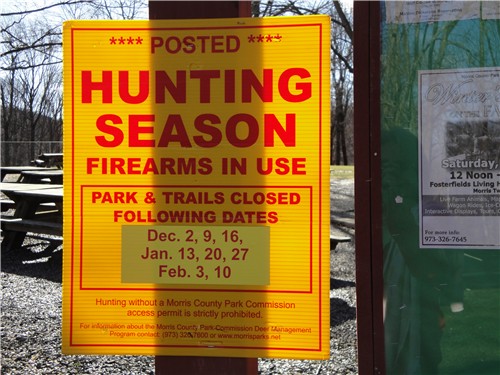 Nothing spectacular at… Continue

Located in Somerset County, off of Rt 27, hike info at:http://www.njhiking.com/nj-hikes-six-mile-run-reservoir.php.

It was supposed to be bitter cold so we wanted to do a short hike, nearby. We hadn't been to Six Mile Run in quite awhile, after doing the short BLUE there trail years ago and didn't think that much of it, as it skirted a lot of fields and such.

I just read that JORBA (jersey off road… Continue

Hi ALL, I run the REI Marlton Facebook page and I wanted to invite all of you to "friend" us at http://bit.ly/68TT2p or on Twitter @ rei_marlton. I just posted our January events schedule, we have everything from learning how to use a GPS to taking better pictures, outdoors, at Batsto Village. Thanks and I am looking forward to seeing all of you OUTSIDE!!!