I cheated on our lovely garden state, and crept just over the border to Harriman for a 14 mile overnight loop on Saturday 7/27/13. Took the train from Rahway up to Tuxedo and started hiking around 10:45am, with the NYC crowd. Other than a previous excursion up to the Bear Mountain a few years back, I’ve never explored Harriman, and really had no idea what to expect. My goal was to hike 7-8 miles to Stone Memorial Shelter and return Sunday, hopefully in time to catch a 12 o’clock train home. 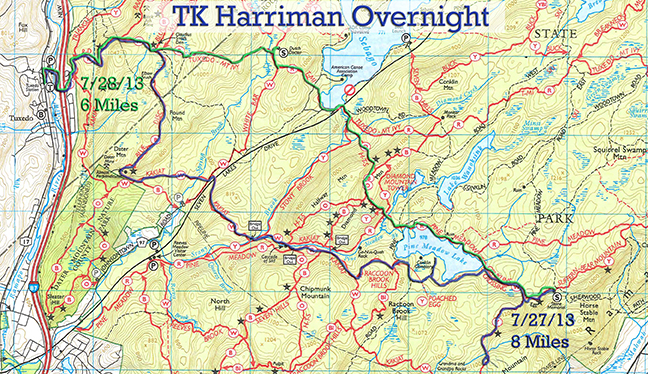 I was alone (yep I’m that guy!) and had roughly 35lbs of equipment. Mostly gadgetry and camera batteries/lenses - being basically a 24 hour blitz I didn’t’ need a lot of clothes or food.

So, on a slightly humid, but otherwise perfect day, I passed under the Thruway and began the transition into the “wild” by climbing up a modest incline on the red blazed Ramapo Duderberg trail. It took nearly an hour to reach the Claudius Smith Den (about 1 mile in), so I knew I was moving slow. I thought it’d take me about 5 hours to reach the shelter, but after covering only 1/8 of my plan in one hour, it was obvious I had underestimated. After Claudius Smith Den, I turned south (after some confusion about the trail split) on the Blue Disc trail where I squeezed through the Elbow Brush (barely). Soon after I hit “Almost Perpendicular” and was happy to be descending instead ascending. Then I turned east onto the white blazed Kakiat Trail and this went into a marshy area where I saw the only snake of the trip along the Spring Brook (unlike Linda Frank, I did not try to shoot it – I had a 10-20 lens on not my 300!). I was shocked to see a whole gaggle of wild turkeys in the woods right before Seven Lakes Drive! I’ve seen small groups at Stokes, but this gobbler crew was like 20+ deep!   All was smooth sailing until the first “Bridge Out” sign along the Stony Brook. When I reached the area I laughed at the “bridge out” conundrum - I mean it was only a hop, skip and a jump across this relatively small stream after all. Well, the hiking gods got the last laugh, as of course it ended up a hop, skip, slip and plant one foot fully in the creek before getting across for me. This wasn’t good. Now I had a completely soaked boot and another 5 miles to go. I tried to laugh it off and move on, but this proved to be a turning point for the day.

I was thinking of “127 Hours” during the next stretch (Cascade Slide). It’s a huge boulder field/stream and I had a tough time following it – so bad I missed whatever waterfall was back here. I scrambled my way through here, and started to feel the pack and 36 years of hard living!

So the wet foot and the creeping exhaustion led to some poor decisions that would affect the rest of the day’s hike. It’s was already 3:30 - at that point and I could have continued south and east on the Kakiat, or take the rugged looking detour on the Raccoon Brook Hill (black blaze) trail. Of course I had to know what the “Poached Egg” was all about, so I headed up that trail. After climbing to the top, the day really caught up. When I finally found the Poached Egg trail it turned out, there was nothing exciting about it at all. There was no poached egg (I expected some bizarre rock or something). It wasn’t until I got home and found this picture it all made sense.

Of course i was too flustered to take good shots at this point. Got this shot from www.danbalogh.com - Dan puts up lots of great posts/pics on NJ/NY area hikes/etc, check it out. 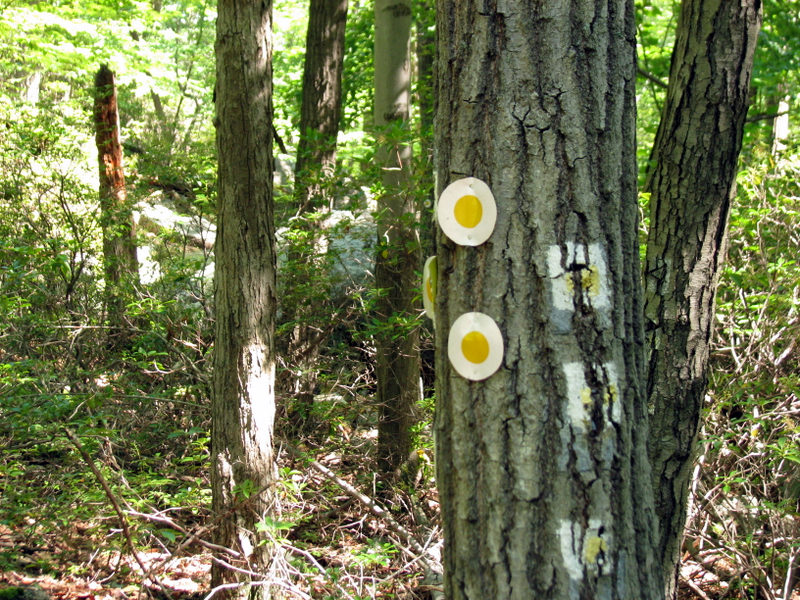 At this point, I was tuckered out. I was a good 5 miles in and heading south and back over another hill onto the RBH to Kakiak seemed tortuous. I found myself standing on a carriage trail next to Pine Meadow lake, eating some cookies and trying to decide if I should: (a) ditch the original plan and shortcut via the carriage road over to this mysterious Conklin cemetery area or (b) follow my game plan and stick to the well blazed known trails. Of course I choose to go with the shortcuts, and as is typical with shortcuts, there’s usually a price to be paid.

The map showed a pink dotted line that connected the carriage trail to the Conklin Crossing blazed trail.  I had figured out that the black dotted lines were carriage roads, so I assumed the pink dotted lines were some sort of trail. So I was looking for some little trail and of course I started to see all sorts of possible trails. I followed one that must have surely been the way, but it eventually tapered off into dense brush. Next thing I know I found myself bushwhacking, with my hiking stick! I was so stressed about having to backtrack that I was ready to trail blaze on through! Finally, before I got too deep into the woods, I came to my senses, and got a hold of myself -  I’d have to turn around and backtrack before I got myself into a real bad situation. I was utterly pissed off and in a foul mood, as I headed back down the carriage trail. I passed a water pipe and stopped briefly to take a photograph of it.  I thought to myself, “Hmm It almost seems like you can walk along it like a path”. Low and behold the pipe line was the unmaintained trail on my map, and I ended up walking this thing to the end of Pine Meadow Lake where it hits Conklin Crossing (white). I was definitely dragging by now -  it was 4:30 and I was ready to bang out the last half mile and get to Stone Memorial. I manned up, and put my head down and moved one foot and then the other. I was on the lookout for water in this area, as the map shows a stream around here. Having drank everything I brought in, I needed some for supper and welcomed a hobo bath too.  Well, turned out the stream shown on the map that I assumed would have water, was basically muck. So water now a problem also. Oh and that wet foot I had gotten 3 hours ago. Some epic blisters had formed on it!