I decided to push and get to the shelter so I could get the pack off, tent up and look for water. The Conklin (White) hit the Yellow (Suffering Bear) and I quickly turned right.

The map showed another ‘Egg” over here. At this point I’d had it with the &*%^ eggs at Harriman! Twenty minutes later, and I was yet to see anything that looked like an “egg”.  Forty minutes later and I was somehow in a swampy area cursing to myself -  definitely  the lowest I’d felt out there. And for a place that’s supposedly crawling with weekenders I hadn’t seen anyone since Pine Meadow. Thankfully I soon passed a pair of guys that pointed out that I had made a wrong turn – it should have been left, not right, when I hit the Suffering bear!! 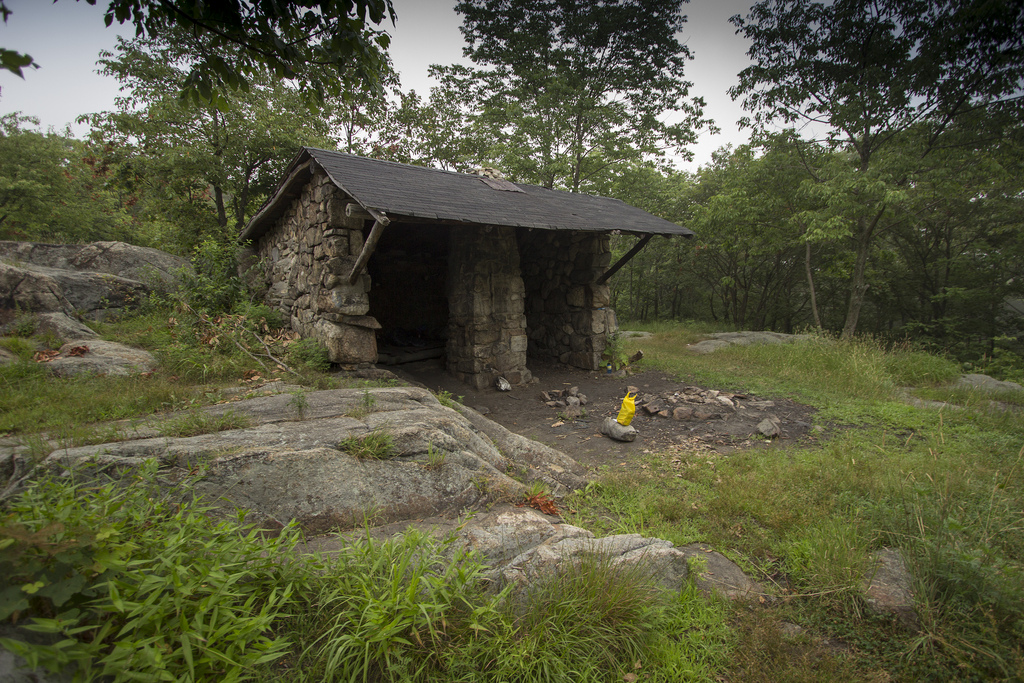 I finally reached Stone Memorial Shelter at 6pm. Not a soul in sight. I thought for sure there’d be fraternities up here with kegs of beer and hacky sack games going. I was happy as the shelter looked pretty photogenic and with the clearing I figured I’d get a good view of the night sky. However I felt weird being the lone guy that takes over the shelter, so I  decided to just chill out for a while, relax and wait to see if anyone else showed up.

A small party soon passed and I offered to let them have the shelter but they said they had their own spot nearby. At 6:30 I decided to get into motion and get the tent up and some wood gathered. I noticed a carriage trail right next to the shelter, that seemed to led to another creek (per the map) so I headed down it hoping for some quality water. No such luck. Seemed I’d have to make do with some stagnant swamp water that was located right by the shelter. I iodined the hell out it, and boiled it for good measure. I intended to keep my water consumption to a minimum until I found a better source.

Around 7:30 an older lady and two college aged kids (daughter and boyfriend) rolled up to the shelter. We made introductions and they set up inside the shelter. We got a nice fire going and enjoyed a beautiful summer evening in Harriman, after (for me) a trying day.

I woke up in the fog on Sunday July 28th. Since Saturday’s hike had taken so much longer than anticipated, I was nervous about reaching the train for noon (problem with missing the train was that the next one wouldn’t be until 4pm and took much longer to get home).  I slurped down a quick cup of joe and packed up. Hit the trail by 7 backtracking down Stupid Bear (Yellow) to Conklin where I hit new trails and finally saw  Pine Lake, up close along the Pine Meadow  trail (Red).

Quite a few “not so stealth” campers had set up on this side of the lake. Nice area, definitely something to consider for a future trip. Obviously the ruined old pump house area would be fun to explore but I was in too much of a rush so I scurried up the hill and turned north on Hillburn-Torne-Sebago (HTS-Orange Blaze). Ran across a real cute deer family here that were as interested in me and I was in them.  Managed to stop and grab a nice pic of Pine Meadow.

View back on Pine Meadow 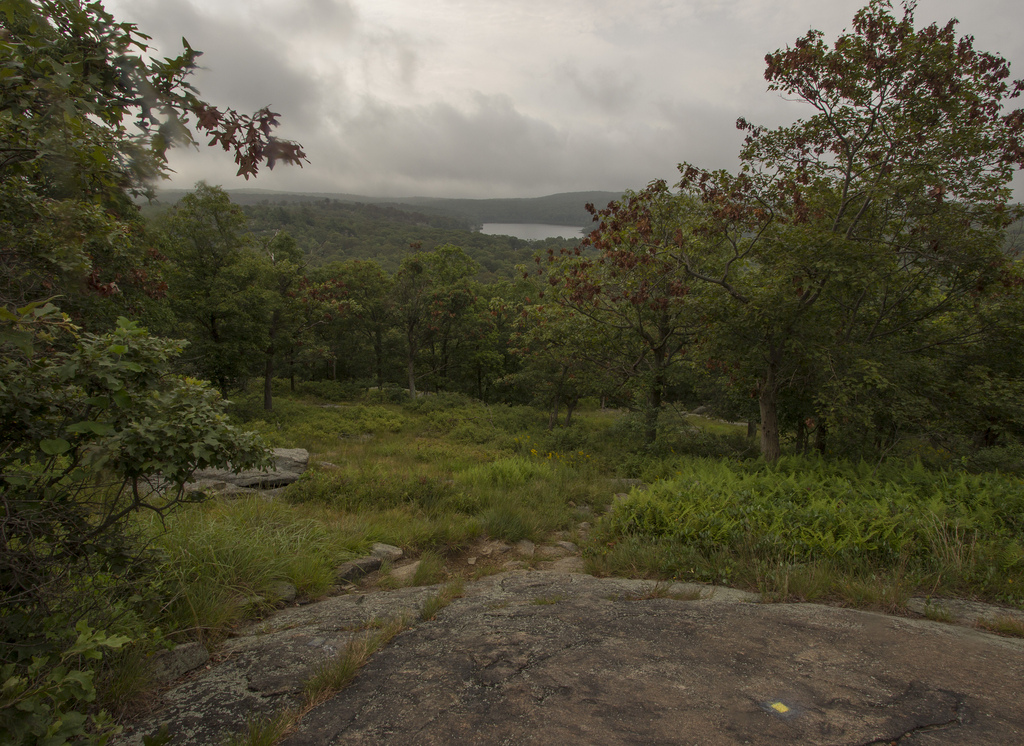 After another poorly marked split of Orange/Black, I hit a another serious scramble down on my hands and butt at times.  I reached the Stony Brook, and took advantage of the stream to finally freshen up and scored some decent drinking water finally. I crossed good old Seven Lakes Drive around 10. Per the map it appeared to be the halfway point, so it had taken me 3 hours get here. The entire hike was catching up with me -  I now had blisters on both feet and was pretty sore and slightly dehydrated. Of course I made one last small mistake and ended up briefly off the red but at least it put me by the Dutch Doctor Shelter which I wanted to check out. Nothing great about its location, other than it’s relatively close to Tuxedo.

I found myself on top of Claudius Smith at 11pm. The train was in 55 minutes. I rushed down and soon passed the last nice vista of the hike (with views of Tuxedo). I sure felt a lot better when I was there 24 hours early at the start of the hike! Of course, Harriman had one last trick up its sleeve to throw at me - it started pouring rain! I had to stop and put on the poncho get my camera squared away which wasted another 5 minutes! I was really trying to rush the descent, but I was aware that it’s rushing too much and making a careless slip and fall would be far worse than missing the train. So carefully rushing, I managed to hit the road at 11:30! I made it to the train station for at 11:45. Even had a minute to run across the street and grab a nice cold Gatorade and bag of chips for the train ride home!

All physical benefits from hiking were instantly wiped out for $10 at Burger Express when I got home! 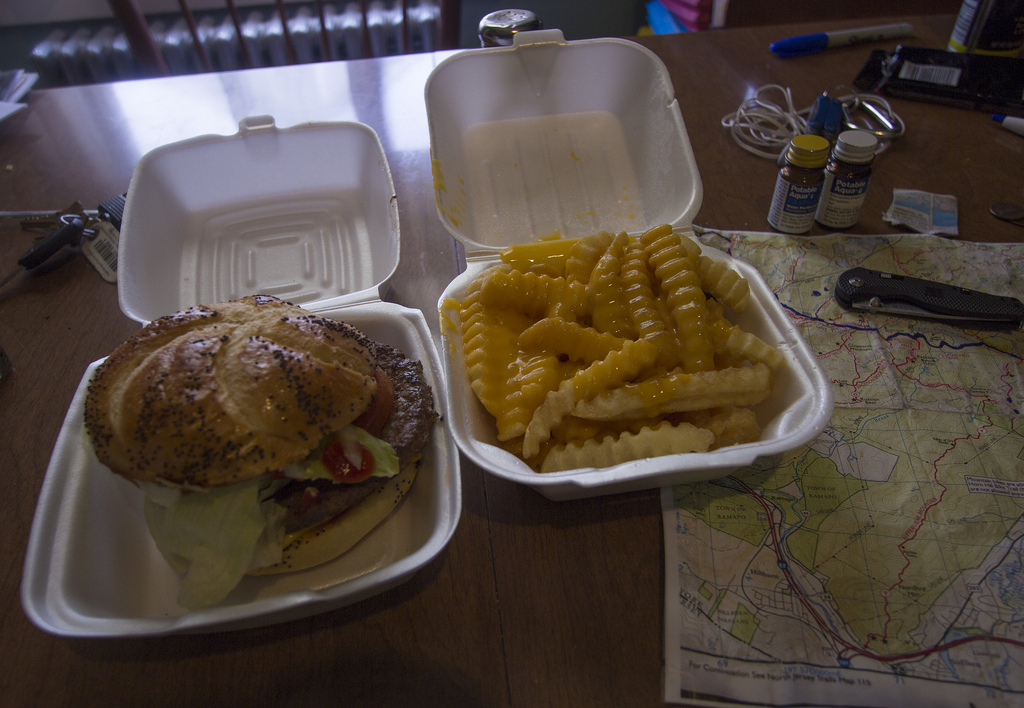 Stone Memorial Shelter – Seemed like a remote area of park, cool looking, probably infested with mice. Poor water supply in area, at least on this trip. Decent sky view, no vista for sunsets though.

If you told me Harriman was some Lenape Indian work for “Lots of Rocks” I’d believe you (turns out it’s an old train tycoon’s land of course). There were some serious scrambles that I happened to always hit descending fortunately! But I still often ended up on all fours in one way or another! I can’t think of any trails I’ve been on in Jersey that had scrambles like these trails had.

Southern Harriman is quite scenic and convenient for those of us without cars. Obviously its size and the sheer number of trails make the number of possible excursions almost endless. Everyone talks of the weekend hordes , but it feels wild enough out there to me. I would often go 2-3 hours without seeing anyone else. I typically only encountered people at points of interest (lakes/vistas) and the only large groups I met were on the Pine Meadow Trail coming/going to the Reeves Meadow Parking area (presumably).

It can be confusing with so many trails and many of the junctures could benefit from some signs pointing you in the appropriate direction. The trip in, largely on the Kikiat, seemed much tougher than the hike out along Pine Meadow and Tuxedo/Mt Ivy. The latter definitely provides better access to the Pine Meadow Lake, and the abundance of “stealth campers” along the lake speaks to that. It is a pretty lake.

This was a big step up challenge wise for me physically with the pack, mileage and terrain. Although the elevation changes aren’t huge, they’re often. I also need to work on my stress management when things aren’t working, and understand that’s part of the game with big hikes. And out there, alone out by myself, I did start drawings a lot of comparisons between the trials and tribulations of finding your way in the woods vs finding your way in life – but I’ll save that for my njphilosophy.com blog! Till next time hiking peeps, thanks for reading. -TJK