Today, Scott and I were off and headed out to one of our favorite spots, Jenny Jump State Park, to see how it handled the storm.

For those who have never been, it is beautiful out there, and we feel an energy there every time we are out there, not ever having to do with the story of Jenny, of which I an still researching that somehow it is related to The Wizard of Oz books, but more so because we always go up Shades of Death Rd and pick up the trail at Ghost Lake.

Ghost Lake, back in the day when it was still Lenape land, was their cemetery.  It was made into a lake by us colonists, and I assume the story of Jenny jumping to her death from one of these mostly peaceful people probably stems from the guilt we have of drowning out their relatives so we could fish.

I'm off my soap box and am moving on.

Driving up the road, the debris in the road was minimal.  Once we started seeing the park's legendary rock cliffs, we started seeing how bad it was.  The trees out there are not saplings.  They're big trees that you can tell have been there for hundreds of years.  They were uprooted, lifted, and laying against the rocks.  It seriously looked like they could slide on down into the roads.  Apparently, obviously, they had in some places as right before the lake we passed some utility workers fixing the lines. We had been there not too long ago and the lake was saturated with lily pads.  Post storm, the water has risen up so much that it actually covered the pads.  Scott tried a little fishing, but he still tried to no avail.  Heading into the forest, automatically we saw more trees than usual down.

Not just broken.  I'm talking uprooted and laying on their sides.  Some you could tell had slid down the cliff.  We actually hit a portion where we could barely pass on the way up and cut through the loop to head up to our destination, the foundation that is rumored to be the cabin.

In all our times there, we have walked the old dirt road that goes up to the trail head for the Summit path.  Never have we seen clay.  After climbing over another myriad of fallen trees, we figured the clay, which should have been by water, was the clay bottoms exposed by the root structures on the fallen trees.

It was just bizarre being out there.  Even any attempt to go past the cliff with the foundation seemed impossible.  Trees were just downed everywhere we looked.  After breaking out Scott's camp stove, we took a lunch break and finished just in time for the flurries to start.  Walking back down, we saw a buck and doe hightailing it to shelter.

We took the path back down, climbing over the trees we could and diverting around them when we couldn't.  By the time we were out and to the truck, the wind had kicked up and you could tell if we were still up on the mountain, we would have been in trouble.

We feel it will be awhile until the forest is cleared enough for most hikers.  We will be going to the ranger station to see if we can help.  Like the rest of the area, I doubt there are enough hands to fix everything that Sandy did. 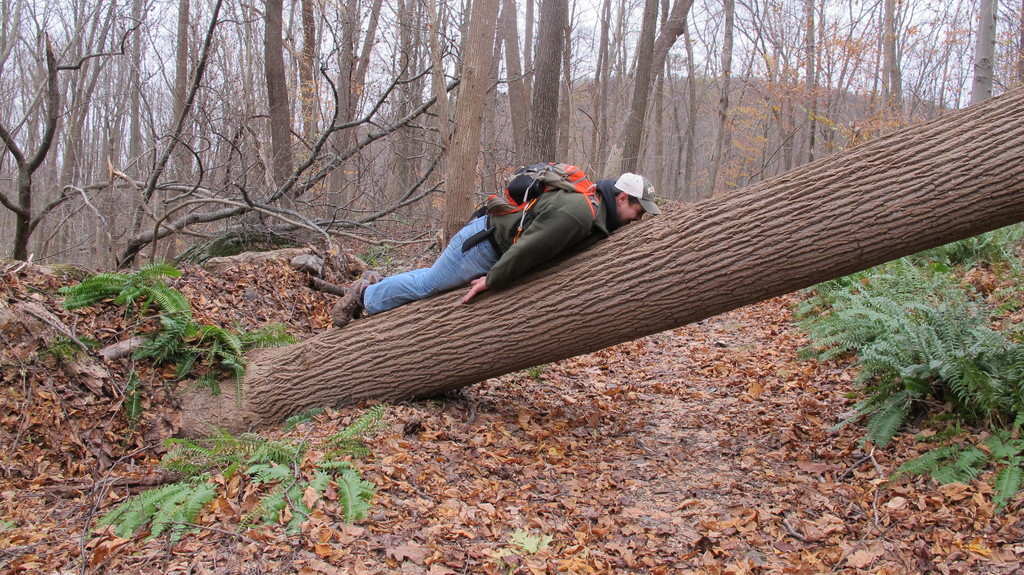 A friend of mine who works for Virginia State Parks told me they are sending chainsaw crews up on Sunday for 4 days to help clear trails for NJ State Parks and more are coming right after Thanksgiving.  How great is that?

That's nice that other states are coming up to help. From the photos I've seen from around the Jersey parks, they need all the extra crews they can get.