Headed out to Merrill Creek yesterday (6/29/13) for a nice summer dayhike with my girlfriend. I've fished here in the past but never spent any real time exploring other than the boat launch area. It's very similar to Round Valley (RV)  (lake trout population, very deep, built in 20th century as water control). In fact, the reason I chose this hike was based on my Uncle Jim's suggestion during the RV trip. He was struck by their similarities as well. Merrill Creek Reservoir (MCR) is much smaller (650 surface acres vs RV's 2,300) but more remote and as far off the beaten path as you can get in northern NJ, unlike RV which is right along Rt 22.

Started at the Visitor Center at 4:30pm (regrettably, we didn't go inside visitor center). The first 20 minutes are in the woods, then you start circling the lake. This is a very easy hike - other than length (they list it as 5.5 miles on their maps) there is nothing taxing about it. It's more or less level, and most is on dirt roads or dams (I presume these roads were built by the workers/machinery to build the reservoir back in the 80's).

Irena with Outlet Tower at NW Dike 2 in Background 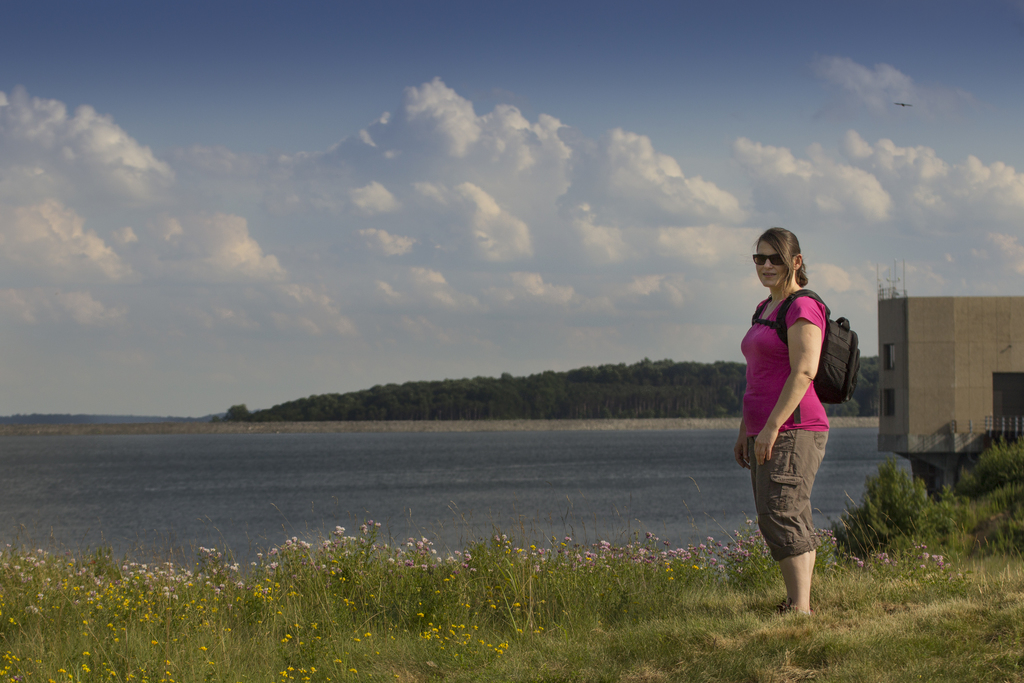 What sold me on the hike were the multiple walks across the dam/dikes. At RV they won't let you anywhere near them for fear of terrorism (although I don't think you were allowed on them pre 9/11 either). At MCR, you can hike right across them, which gives a great view (not to mention nice level tripod spot for your landscape photos!!). I also enjoyed the fact that you're going in a big circle and you can see your next objective and gauge your progress.

The main dam is pretty cool and the views down the non-Lake side are almost vertigo inducing - it's no Hoover dam, but it must have been quite a production to build this place. And the only way to see it is to hike out there (I guess you could boat or kayak too, but this isn't njboating.com)

It took us 3 hours to make the 5.5 mile loop but stopped often to shoot photos/videos. After the hike we returned to the Outlet Tower Parking lot (via car) to picnic/shoot some more before heading home. Good hike, good times.