This park is on the newer Jersey Highlands Trails map but there is also a map on the township web site and a free map on the NY/NJ Trail Conference site.  Parking lot coordinates: 40.971152, -74.325497

It's not a very big park with just under 5 miles of trails but since I was going to be 3 miles away for a chiropractor appointment for my dog, figured I had may as well take half a day off and do a little hike there with her before her appointment.  Imagine my surprise when we got to the park to find this when the Township of Pequannock web site says dogs are allowed on leash: 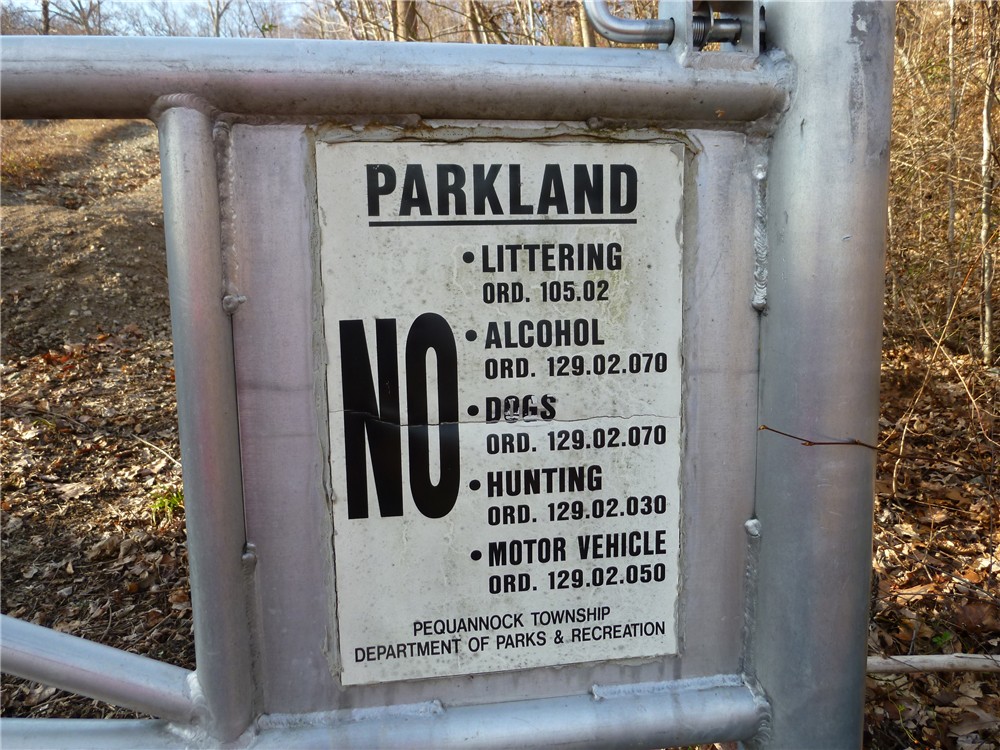 The good news was that it is a no hunting park, which I had hoped for on a week day.  But it was almost an hour drive back home and I was 3 hours early for Shawnee's appointment so what to do?  Well, we went ahead and hiked.  More like tiptoed through the woods very, very quietly...  Honestly, I would never bring her to a park where dogs are not allowed but the information conflicted.  We hiked the western side of the park away from the scenic overlook figuring other people would be on the overlook side of the park.  That worked, we ran into nobody else but only hiked 2 miles, the orange and red trails.  I was feeling guilty for having broken the law so I cleaned up all the litter in the parking lot as penance, and because we were still an hour early for her appointment.  I emailed the Township of Pequannock Director of Parks and Recreation last night about the discrepancy and he responded first thing this morning saying dogs are allowed and he will have the park ranger change the sign.  So for those of you who hike with dogs, ignore the sign - you are legal!  I'll hike the whole park the next time her appointment falls on a nice day now that I know we can.  There is a lot of I-287 traffic noise, not so bad farther out on the trails.  Unless you prefer shorter hikes, don't think it is worth a long drive to hike there but it's a good no hunting option if you are in the area.  The trails are pretty rugged, some old woods roads, some foot paths, some rock hops across streams and it's hilly so you get a workout.  Trails are pretty well marked.  Had a little difficulty on the southern part of the orange trail as it doesn't seem to be used much so there were some minor blowdowns and it was sometimes hard to see the trail because of the leaves but just stopping and looking around for the next marker worked. 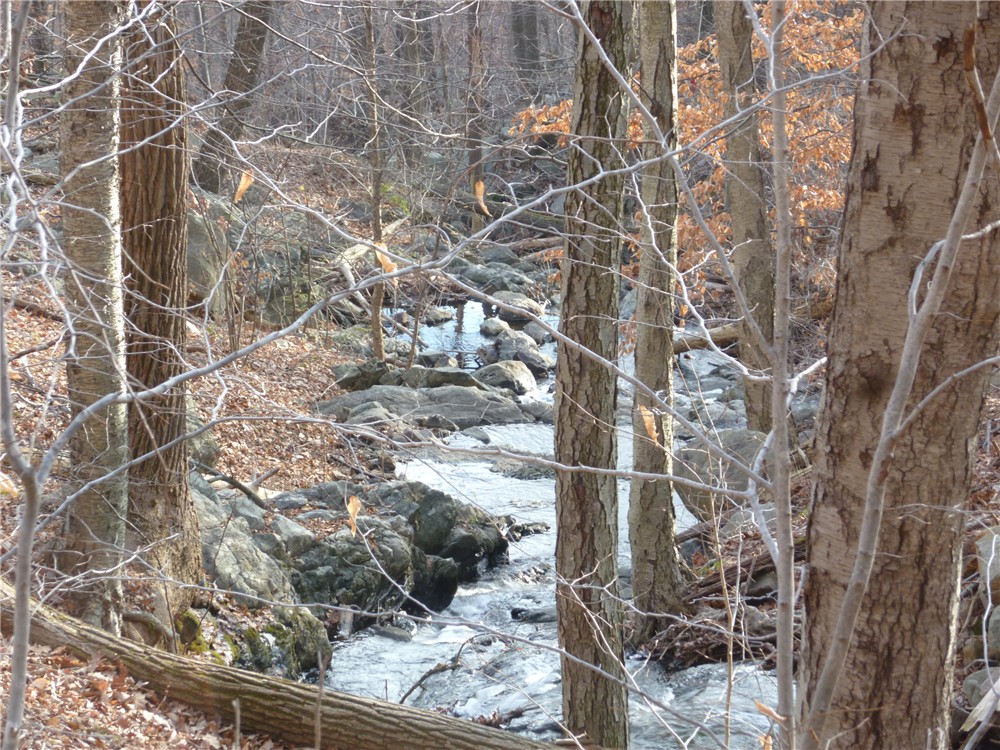 Daniela - I was reading Shawnee's blog for this hike and cracking up over the woman using your hint to catch her dog. I'd never heard of that method before so I emailed it to my brother in case he didn't know either.

He could have used that technique when their one dog was younger as she escaped from everything and was very difficult to catch. They've just adopted another dog, so that's good to know just in case she turns out to be a Houdini as well.

Dawn - Oh gosh, been there, done that.  I have had some great escape artists and know firsthand that no matter how vigilant you are, they will find a way...  You can imagine how refreshing it is to have Shawnee who won't leave me for any reason whatsoever.  I have had people ask if I am injured while hiking if she will go get help.  Most definitely not.  You will find us both out in the woods with her sitting on top of me.  Tell your brother I have heard it only works once with some dogs because they catch on after the first time so he might want to save it for when he really needs it and not practice doing it.  I have never had to do it twice with the same dog so can't tell you firsthand if that is the case.  I should explain what we are talking about in case others are interested...

If a dog runs away, people automatically chase which is the wrong thing to do because it becomes a game and they just keep running.  Or they will wait until you get very close then when you go to grab them they bolt.  So when the dog is fairly close to where he can see you, don't pursue or try to grab but instead drop to the ground on your knees with your head down and your arms covering your head and start whining like a dog would whine.  You will look like a total fool but the dog will wonder why you are doing that because it is so out of the norm and unexpected, come over and sniff your head, then you just reach up and grab the collar.

Daniela -I let my brother know that trick will probably only work once before they catch on.  Bela used to be able to get over, under or through anything and I wouldn't be surprised if she teaches their new dog her old tricks.

I was reading Shawnee's blog for this hike...

Oookaaay.....I didn't know Shawnee had a blog of her own.  I know animals can communicate their feelings better than some of we humans sometimes. But in print?  And how does she navigate the keys w/her paws? Much like some women with lo-o-ong fingernails I imagine.

So, where can I find it?  I'm always interested in the writings of others.

Linda - oh you need to check out http://shawneetheshep.blogspot.com/ ... that's how you find out what really happened on Daniela's hikes... Shawnee tells it like it is.

Oookaaay.....I didn't know Shawnee had a blog of her own.  I know animals can communicate their feelings better than some of we humans sometimes. But in print?  And how does she navigate the keys w/her paws? Much like some women with lo-o-ong fingernails I imagine.

So, where can I find it?  I'm always interested in the writings of others.

Now keep in mind, because of the, ummmm, difficulties you mentioned, grammar and spelling leave a lot to be desired and quite honestly I spent so much time and effort in training her on commands that I kind of skipped over spelling and grammar...

Bet you did not know there is a whole sub-culture of dogs and cats out there with blogs, did you?

Thanks so much, Dawn for the link to Shawnee's blog.  We absolutely loved reading it through.  And, Daniela, surprisingly we didn't need much in the way of translation or spell checking.  We've learned  dog & catspeak many, many years ago. Even though at the present we aren't blessed with a furry addition, we still 'speak the language' quite fluently.  Thanks to hiking in the woods, we've even picked up a few words of deer, bear (this R-E-E-ALLY comes in handy), fox, squirrel, chipmunk (my personal affinity), bird and even skunk (good so you can run when a startled one starts hurling expletives at you before hurling some liquid commentary).

I don't know who's luckier to be a member of your family:  you or Shawnee & siblings. I'd guess you all consider yourselves fortunate to have one another.

BTW: I'm wondering if that "falling-to-the-knees-and-whining" ploy will also work on husbands who insist upon continuing a hike as sunset is fast approaching on a trail that's not on the map, not blazed, muddier than a Mississippi delta, there's no cell signal; and the GPS is reading "low battery" while rain clouds are forming; and you can swear you hear one of those bears whispering nearby and laughing: " 'Nuther stoopit  hooman" .  All I can hope is that he'll come over, sniff my head, have pity and reconsider that bail out connector trail we passed a 1/2 mile before that'll get us back to our car at least before total darkness.

As long as he doesn't bolt. I ain't chasing him!