Was just up for a nice end of week hike in Allamuchy Mountain in the Byram area. Finally decided to take the "Ice Cream Trail" since from what I'm hearing as long as you don't venture to the left of the trail, you're still in the park and not on the Scouts reservation and you're good. Plus it's the best way to get to the summit. Well, I got to the summit but wasn't quite able to locate the survey marker, plus a nice size Black Racer wouldn't let me lol - careful, they shake their tails against leaves to imitate a rattler as a warning, they aren't venomous but can leave a nasty bite if they tag you. Anyway, once I got to the other end, it was a bit of a chore finding the Purple trail since until there it's all unmarked biking trails, but I found it and got back up to White. Anyway after maybe a half mile or so I came across a trail I remember seeing when I went the beginning of the summer but couldn't remember where. Instead of plastic blazes, they're the same shape/size and orientation (trail start indicator, blazes) but spray panted on the trees PINK. There were also numerous pink ribbons on the trees as an alternate guide. Now, I know the JORBA maps aren't official, but this trail doesn't even appear on the map, at least not as a marked one (It may be one of the grey dashed-line trails being converted into a real trail), the JORBA map also has it going into "PRIVATE PROPERTY" although I didn't see any signs to indicate it at all. Wonder if the park commission took over the land and someone's in the process of creating a trail there...Best I can describe it is maybe half a mile or maybe a little more on WHITE coming from the direction of PURPLE and heading in the direction of GREEN,etc. it's on the left hand side and the tree at the trail head is clearly marked fluorescent pink blazes. I followed it, curious to see where it went and got to where I would say might be half way and turned around as my phone batteries were dying and needed the GPS, was starting to run out of steam in my hike and saw an area where it looked like the trail was getting a little overgrown. Heading back I took a couple unmarked trails, got a little confused but found my way out after coming across a black bear. I got maybe no closer than 75 yards before i just stopped turned and walked away. watch out, they'll be feeding up for winter soon!

Anyway, a little warm today than I'd like and exhausting but a good endurance hike. 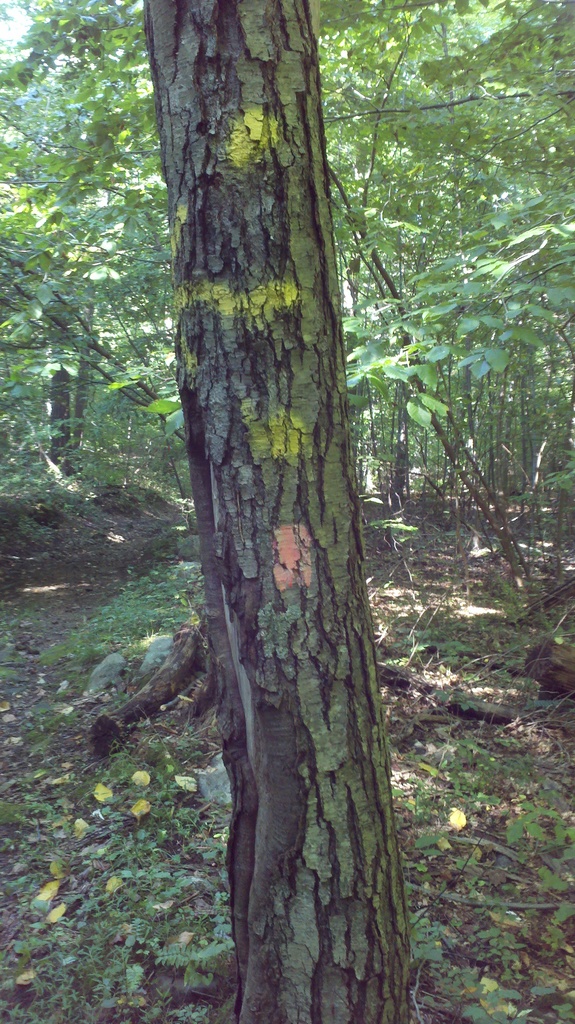 I just got a chance to look thru our GPS stuff for this to see if I had anything marked for this, we don't, and I haven't read anything about a new trail so I am not sure if the PINK is the beginning of an actual trail creation, or just someone's casual markings. Interesting though.

Just so you know that is not a officially marked trail. As you suspect, it was marked by someone and looks somewhat official. The NJDEP has not taken ove the property to the west of the Park, its still owned by the Church. Sounds like youhad a great hike. One thing to remember, the trails maintained by JORBA are not just bike trails, all the trails in Allamuchy North, Deer Park and Stephens SPs are all muliti use and are open to hikers, bikers, and horses. Each trail may be more suited to one user over another but are open for all (as long as you dont have a motor)!