This past weekend was too good to pass up making the most of both days.  Sunday we drove up to Sterling Forest (leaving before dawn to get the most of the shorter daylight hours).

We'd never been to Sterling before so a stop at the excellently-staffed and extremely helpful Visitors'  Center was well worth the extra time. We were also most grateful for the personal highlights as well as precautions for the various trails from one of the park's rangers accentuated by the Center's interactive, almost Disney-esque table top topo map.   You can actually see in great detail an overhead view of the terrain/elevations & descents over which you'll travel each trail that's highlighted in colored LED lights when you press the accompanying button for that particular trail.  It's what made us decide against doing the Wildcat Loop Lollipop because while we didn't mind the steep uphill of the 'stick' end of the lollipop where the hike began, that 'stick' would be an out and back at the end and equally steep descents aren't my favorite way to close a hike.

So we opted for the Iron Mines -Bare Rock/Greenwood Lake-The Fire Tower 7.5 mile loop. We clocked in 8.6 because we bushwhacked a bit for some ridge and waterfall views.(*Note: The above link advises you have to bushwhack around a beaver-dam flooded area of Jennings Creek where the Fire Tower Trail  leaves off to the right of the Green Valley Trail.  It instructs you to follow the remnants of some pink-tape temporary blazes. Not to worry.  Since that review was written, the NY/NJ Trail folks (bless them) have completely and officially re-blazed the newly rerouted Fire Tower Trail in its official white w/red stripe blazes.*)

Moderate-strenuous due in part to length but mostly, IMO, to the extreme steepness of the next to last mile or so up to the Fire Tower which is near straight up bare rock climbing. 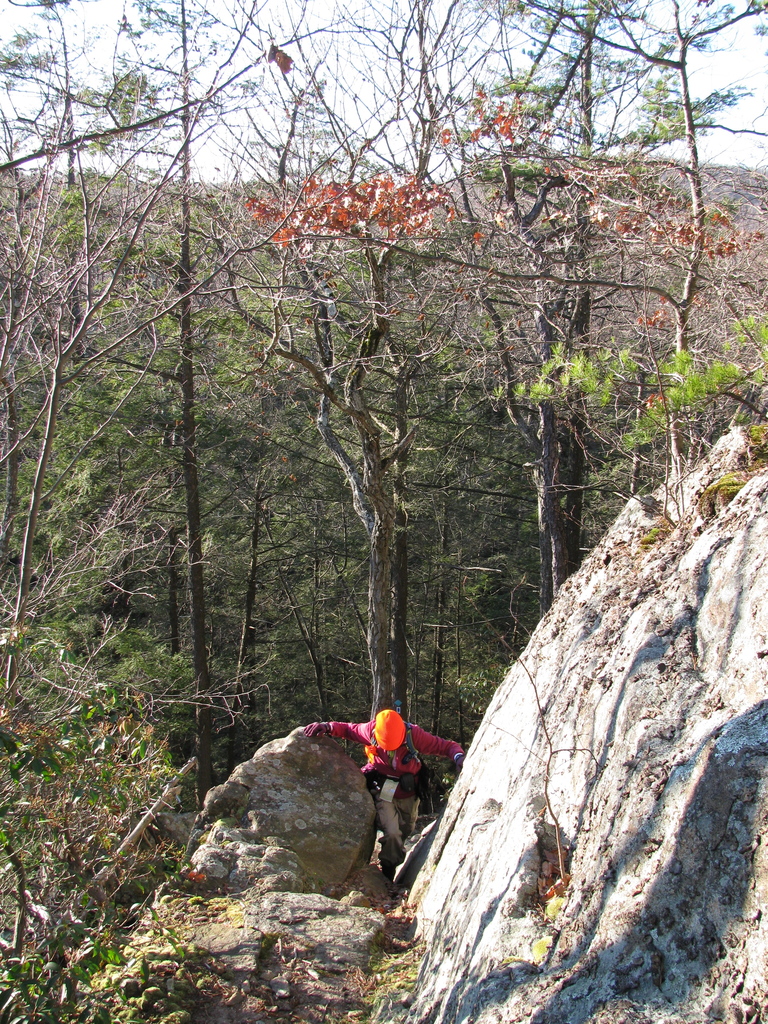 Nearly all inner valleys clinging to remains of snow that must have fallen throughout the week.  Trails that were coated in sloppy, slippery, mud-covered leaves just a few weeks before, were now crunchy underfoot from crusted, icy mud-coated leaves.  It made them actually easier to traverse and less slippery underfoot than the former slick mud. A bit more caution, however, was exercised on the icy-covered rocks of trails that had become streams only days before.

Interesting ice patterns everywhere of little pools of water frozen in time overnight and remaining throughout the frosty morning. 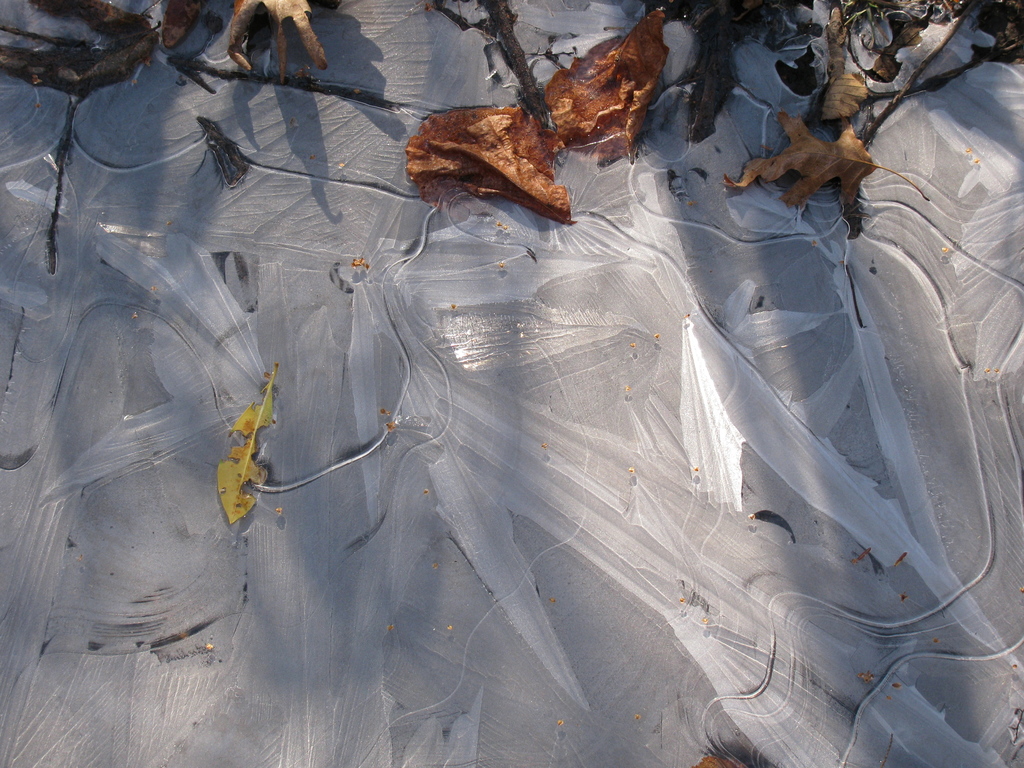 Many creeks/streams were filled to the brim and submerging good chunks of rock crossings.  Since my leg stride is only just so long and I'm not into actual, literal "rock hopping", it just meant ferreting out more maneuverable crossing points.  Doable and no wet shoes thanks to the Gods of GoreTex.

Really cold and windy at the outset.  Larger upper parking lots near Visitor's Center was about 1/3  full by the time we got there about 8:30am.  Glad to see so many other hikers w/poles as we always carry. Often times on trails we'll get looks from some, uh…"younger" hikers as if assuming we need them in lieu of canes!  Not!  In an area like Sterling (or Ramapo which we did the day before) I think trekking/hiking pole(s) are more than just a little justifiable even for the best of knee joints.

Wonderful views of 6 mile-long Greenwood Lake. Another great place to view hawks, raptors and bald eagles! Yes, just as we were finishing up the last of some homemade granola cookies, we saw a pair of bald eagles flying side by side, straight down the lake from New York to New Jersey.  What a sight.  Unfortunately, by the tiime I grabbed my camera they were way out of range.

I believe that's Norvin Green somewhere down there way off over my left shoulder on the other side of the lake.  Where that little isthmus of land juts beyond and over my right shoulder "sort of" marks the lake's border between NY and NJ. Geography's not my strong suit so I might be wrong there. I usually just follow the blazes, our GPS, maps, compass and, oh yeah, my husband's excellent sense of direction who's never once gotten us lost.  (**Wellllll, there was that time at Buttermilk Falls and then again at Stonetown Circular and....okay, so he's not perfect but I can't imagine anyone else I'd rather get lost with on a trail. **) 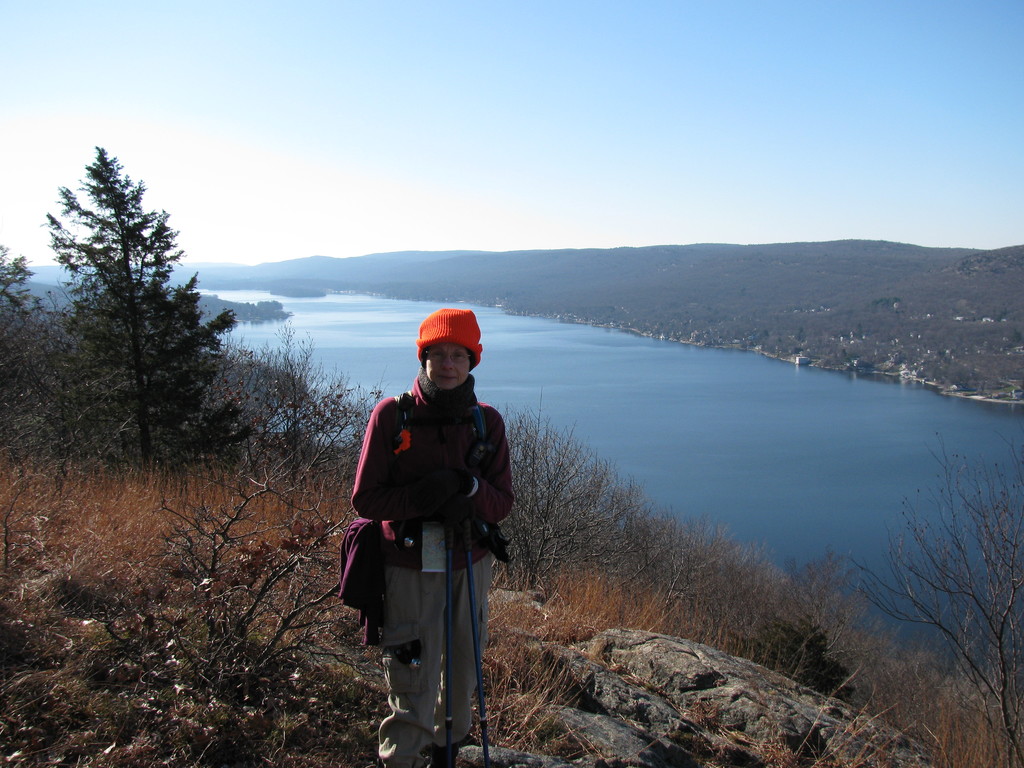 All in all a great day, great frosty weather, great hike, great overall place to be visited many times again.

Of course, the pizza afterward was great, too.  No ice cream this time, however.  We were both so tired after the hike and the cold windy weather and then the long drive home that we were barely able to keep our eyes open long enough to scarf down some of the pizza. So any ice cream placed before us after that would have surely melted like Frosty in the town square while we dozed.

Nice post. You know, I've gotten looks from using trekking poles too but I think it's because people think it's strange I am using 'ski poles' when there is no snow - I've been asked about them so many times.