When I got into this backpacking thing this year, I never thought it’d be anything more than a summer time hobby to get out, shoot some photography and get some exercise.  Turns out though, that I enjoy the planning, physical challenge, and quite honestly, the solitude, so much that I can’t wait until next May to get out there. In fact I now see winter backpacking as a new chapter with it’s own challenges and rewards. 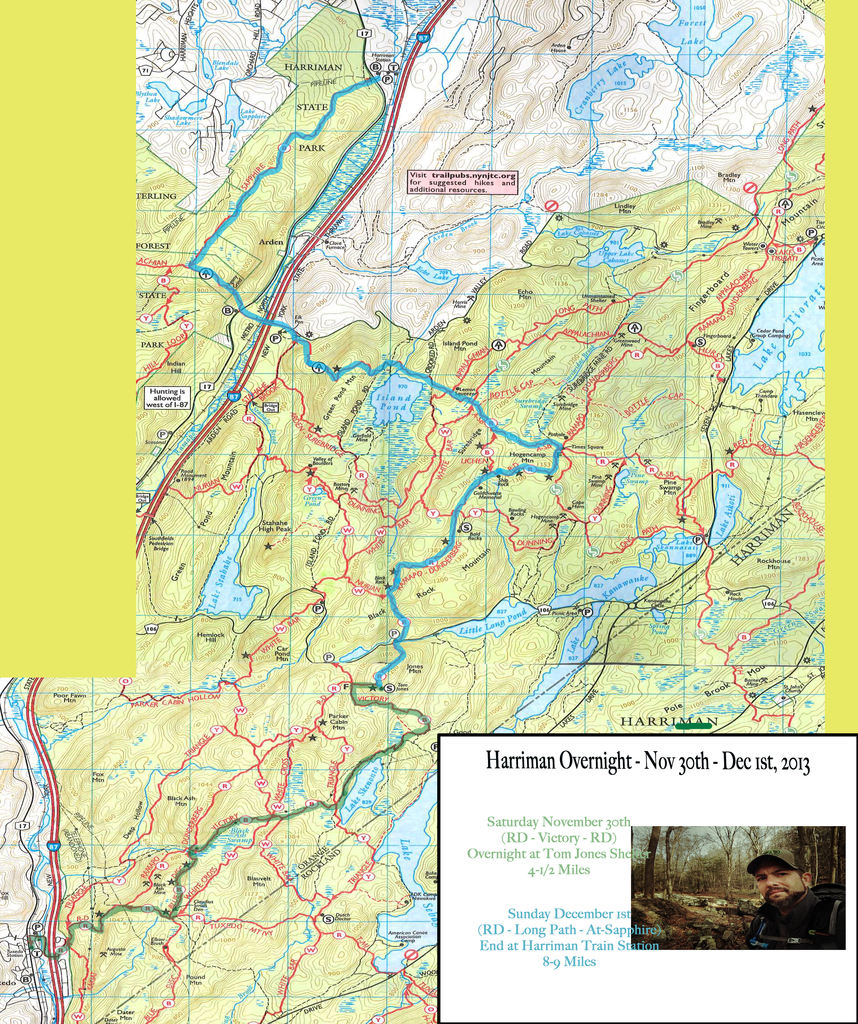 Although it’s only technically Fall, it sure felt like winter when I took the train up to Harriman SP on Saturday November 30th  (2013) with a plan to get off at Tuxedo, hike to Tom Jones Shelter and head north on Sunday to finish up at Harriman train station.

Hit the Tuxedo train station at 10:20 and set off the usual path under the NY Thruway. It was chilly, in in the low/mid 30’s, but otherwise it was a nice, crisp late Fall day. I sped up the Ramapo-Dudenberg (RD) trail to Claudius Smith’s Den in 45 minutes and then headed north on the Blue Disk (BD) trail.  I didn’t see anyone, either getting off the train or on the trails at this point and assumed I might have the park to myself! Well right at the top of the Blue Disk I ran into a large "Meet-Up" sorta singles group of 20+ folks having lunch. The BD is a nice section of trail, with (2) nice  scenic vistas and then a quick descent down into the Black Ash Swamp. Here I turned northeast on (probably) the easiest trail in the park – the  Victory trail. It’s largely an old woods road walk for the next two+ miles along the pretty Lake Skenonto. There was a large group of boisterous Asians having quite the picnic lakeside, and I decided to do the same.  Boiled up some water and had some ramen and coffee along the lake (I suspect the Asians had much better food from the smell of things). In the summer I’d never stop for a 45 minute lunch, but some hot snacks hit the spot on a cold day!

I continued down the Victory trail (it leaves the road and becomes real hiking again) to the “Fire Pit” where it again connects with the RD. Had a small hill to scramble up to reach the scenic Tom Jones Shelter. Total in was about 4-1/2 miles – a very easy 4-1/2 miles too I might add.

I wasn’t the first one there though. I assumed no one else would be crazy enough to come out when it’s this cold, but I was quite wrong. The party that beat me there consisted of a very nice German woman, Ursula, with her 15 year old son and his buddy. We made introductions and made a collective effort to gather and cut a lot of fire wood for the cold night ahead.

It was cold that night, low 20’s. We had both fireplaces going and I can confirm that they do not heat up the shelter! Once you’re more than 5 feet from the fire it serves no purpose other than decoration. Fortunately Ursula and the boys were good company so we spent the evening conversing, taking photos and enjoying hot coco around the fire. Ursula happened to mention to me something I didn’t know which added a bit of campfire spookiness to the outing – that a murderer had fled into this park in late 2012, and may or may not still be out there! I know it sounds like an urban myth, but it stayed in my head the rest of the night! And it turns out she was not kidding, the story is true and he's still at large (google Eugene Palmer). 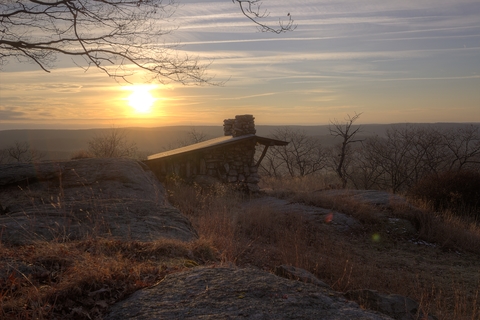 I was up (well not that I ever seriously slept in that cold shelter!) bright and early for sunrise at 7am. Had some coffee, packed up, bid farewell to my new friends and hit the trail by 8:30. Headed north on the RD, crossed RT 106 and headed up Black Rock Mountain to highest part of the park (1382 feet), right before Bald Rocks shelter. There were 4 separate parties up there that had overnighted, so apparently the cold weather doesn’t deter folks! I had been this far on the trail earlier this fall so I was excited to get into new terrain past Bald Rocks as I continued north on the RD. I spent 20 minutes looking for the Goldthwaithe Memorial but couldn’t find it (honestly I was looking for something more substantial than the small plaque that I later learned was it). Next up was Ship Rock (it’s supposed to resemble a ship's stern sticking out of the ground) which is pretty unimpressive, although it’s an interesting area that’s apparently suffered a forest fire in recent memory which adds a strange ambience to the area.

I reached a major junction nicknamed  “Times Square” by 10:30. Here I bid the Ramapo Dudenberg goodbye for good, and headed north west on the aqua blazed, Long Path. Again large groups of Asians were hiking through, clearing the area of any wildlife that might be around – I just think it’s strange they always travel in groups of 10+, never as couples, a few buddies or parents with children. I’m starting to think it’s an Asian singles hike (can't presume white people are the only ones looking for love ion the trails!). This area had lots of uprooted trees, presumably from either Irene or Sandy, but the trail for this small ½ miles stretch was pretty uneventful.  Next up was the big dawg, the AT and the infamous “Lemon Squeezer” followed by a scenic stretch above Island Pond. This area has some nice stealth tenting sites I’ll be checking out in the future and seems like a fun area to explore.

It was lunch time, and I considered having another lakeside lunch but instead headed up Green Pond Mountain to the star on my NYNJTC map hoping for a good spot to time-lapse (I had carried the camera and tripod all this way afterall and barely used it)! Unfortunately the view at the top is towards the west and of the NY Thruway! I wasn’t headed back down so I sat down for some ramen (so much ramen over the weekend, I might have been hallucinating all the Asians at this point) and hot cocoa and fortified myself for the “Agony Grind” that I knew awaited me. It’s a steep trip down off this mountain to Elk Pen which I reached around 1 o’clock.  Crossed over the Thruway and Rt 17 and started up that beast.

It was a short but tough scramble up. The dead leaves don’t help with the traction and this definitely isn’t a stretch to take your girlfriend on for a causal day hike. By 1:30 I was huffing and puffing and thankful I quit smoking 8 months ago - but I had managed to make it to the top. It’s basically a scramble requiring you to get on all 4’s a few times, but it's only 1/4 mile long really. I continued west on the AT for another 15 minutes until I hit the Sapphire trail which was the final 2 miles to Harriman Station.

Those last 2 miles are a very uneventful and boring stretch that only serves the purpose of connecting the train station to the park – I believe this stretch was added in the last 10-15 years, since Sterling Forest was made into a state park (I'm not sure if this is Harriman or Sterling Forest SP at this point). There was no real elevation changes and the trail is mostly an old carriage road. I took my sweet time, knowing that my train wasn’t until 4pm and there was nothing at the station to do (ie no snacks, food, bars etc. to entertain myself at). I hit the station a little after 3pm and had to sit around for an hour waiting for the train. This was an 8-1/2 mile day, bringing the trip total up to about 13 miles overall.

Let me know if you prefer the blog or the movie!

Cold weather requires a better sleeping bag (I only had a 40 degree bag and a liner) and more preparation than I gave it. The lessened crowds and cold weather are nice, but the cold nights are tough. One of the main reasons I wanted to go out, was that the cold weather makes the air much clearer for photography, but I didn’t like stopping while hiking to shoot, because then you’d get cold! I was hoping to shot some astrophotography, but had cloud cover over night at Tom Jones, although at some point in the wee hours it cleared up and did reveal a decent sky being only 45 miles from NYC.

This trip also awakened a sense of history of the park in me, as I became curious about “who was Tom Jones?”. “Who was Claudius Smith?”. Why is this trail named the “Victory Trail” (Tom Jones was a member of Claudius Smith's gang - and Claudius Smith was hung to death in 1776 - interesting stuff!). Harriman has quite a history I just bought and stated reading “Harriman Trails: A Guide and History” to give me a better sense of the parks’s long history.

Hi TJ…great write-up as usual. Many years ago, when Harriman was literally my back yard, I could walk out my door for a 2-3 day trip.  I think I've hiked all the trails in the park, including 1 day hikes of the RD (my favorite) and the SBM. Harriman is a very special place.

P.S. Really liked you AT video as well.

Brom - Thanks for reading my blog and commenting. Harriman is an interesting place -  I hope to get to know it much better over 2014.