This warning at the foot of The Giant Stairs (trail) which skirts the Palisades Cliffs along the Hudson River is an understatement. 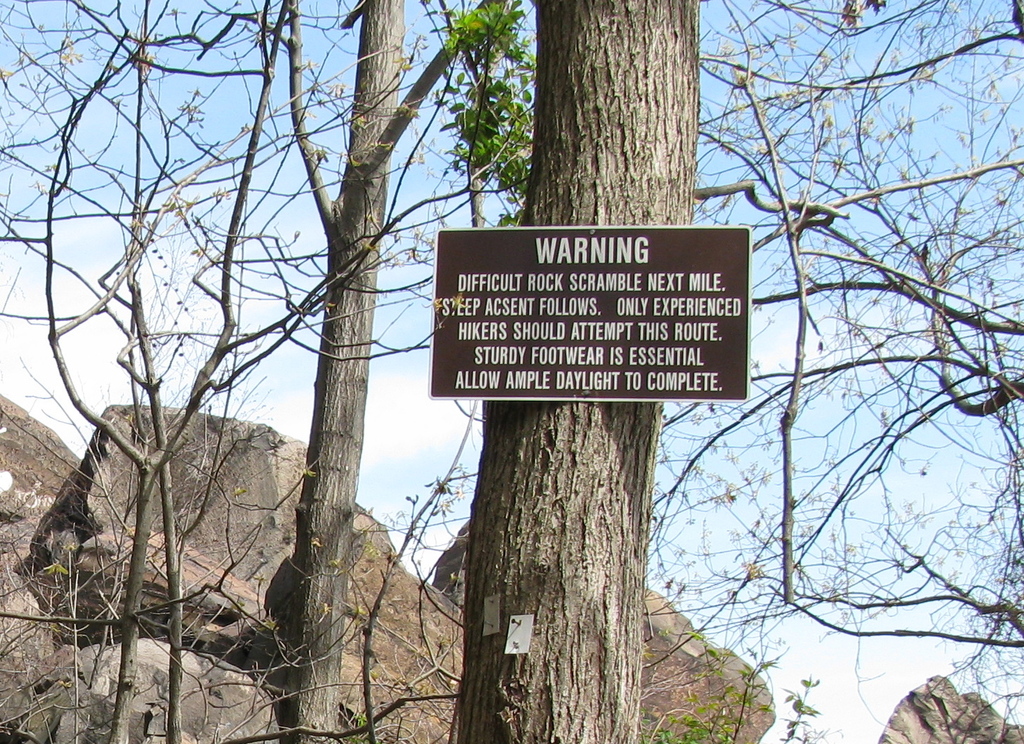 We've done some bouldering and similar rock assaults as this one, but never over such a prolonged distance or precariously close to sheer drop offs - some w/vertigo-inducing distances to the rocks below or the river's edge. 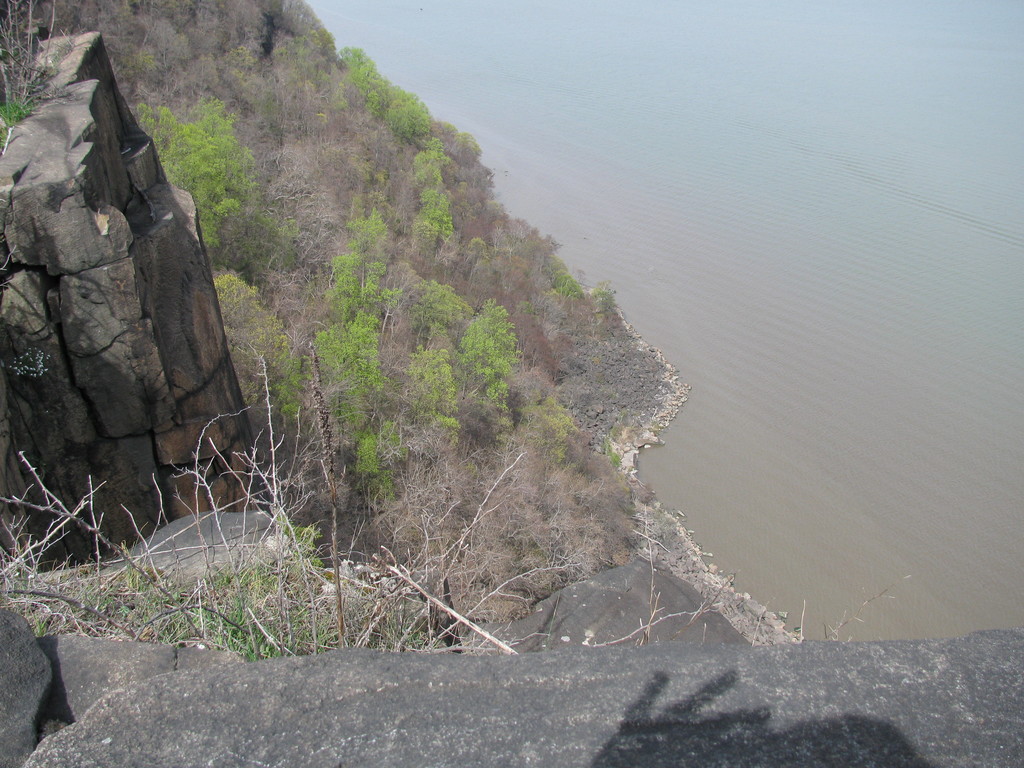 One must truly walk ON the boulders and not step in-between where, in many cases, you can see daylight or gaping slits of bottomless darkness. If you carry poles, either lash them to your packs; keep straps secured around wrists or (as I did) at least shorten them.  Most times I just used my hands to maneuver up, down and over the huge bouldered trail.  But on several occasions my poles were a significant asset in preserving my balance or aiding me to position my legs at angles legs were not normally meant to be angled.

We basically followed Daniela Wagstaff's hike, parking at the Palisades Interstate Police Headquarters and starting on The Aqua Trail 100yds or so down the road from there.  We included sections of both the Shore & the Upper Trail, reaching the southerly end of The Stairs in about 3 miles.  After the challenging Stairs we continued on the trail to make an off-trail pit stop at the State Park Lookout.  We then picked up the Aqua Trail again and included several side trails to scenic overlooks before getting back to our car at the police HQ.

Total distance was around 8-1/2 miles.  Daniela's was 9.  So your mileage may vary.   Timewise?  Much depends on how well you fare the Stairs.  Also, the day of the week and the time of day are a big factor.  We had no choice but to go on a Saturday, which we knew from the git go would mean crowds. If you can manage a weekday…do it!!!  Oh, and before it gets too hot and you also have to share the trail with rattlesnakes basking amongst the heated boulders.  We left police HQ around 9:15am and got to the Stairs about 10:30 (I think). Approx. 1/3 of the way on The Stairs, we started picking up more people.   Hikers and  'strollers', including families w/kids, boisterous teens and idiots w/small unleashed dogs.  Trying to focus all my attention on not falling and yet still enjoying myself, I would have preferred if those incoming crowds included a few more 'serious' hikers.

**Unfortunately, too many kids don't know the meaning of stepping off trail for someone coming the other way, so I automatically just do it myself w/o any expectations of reciprocation.  But on this trail, there's very little - if any - room Off Trail.  Running, jumping, reckless & inconsiderate kids can make an already intense experience quite nerve wracking for anyone else in the vicinity.   After dashing past us, one such boisterous lad summarily fell not 15 feet ahead.  At first we thought he was by himself.  Before we could get to him, all of a sudden Dad & Mom & two other youngsters (who had been no where in sight up till then), appeared w/Dad holding a tiny Chihuahua in one arm!  We had to scramble up a large boulder and balance ourselves against it for the duration to let them all pass to reach the boy. There was no way where they were that any other hiker could maneuver around them as Dad placed the tiny dog on the rocks and applied some triage to the now-sobbing youth. (Why he didn't hand the miniature dog - who was small enough to slip through a crack in the boulders - off to his wife I haven't a clue.)  So a mini-traffic jam ensued behind us while we all waited for them.  After about 10 or 15 minutes they finally moved on w/the bandaged boy continuing to hippity-hop from boulder to boulder as Mom & /Dad once again nonchalantly lagged behind.

While accidents, of course, can happen to any of us, and I felt sorry for the boy especially when I heard him crying, his tears and the jam up may very well have been avoided if (a) he was warned to walk and did just that because (b) Mom & Dad were close enough to watch & remind him of that. If for nothing else, his behavior put others in jeopardy as well.

As for that myriad of other little and/or unleashed dogs????  Let's just say that I didn't know there were so many ways to be told to mind my own business.  Gee, I wonder how severely I would've been told off if I'd expressed equal concern for their kids??? **

Aside from that, it was a wonderful experience and one that, IMO, every hiker should share.  The views from atop the cliffs were spectacular as were the unbelievable numbers of raptors skirting the thermals up and down the cliffs and over the river. This time of year the trails were alive w/spring blooms, too. Native columbines, species geranium, trillium, fields of periwinkle, phlox,  huge clusters of daffodils, dogwoods, some redbuds and an enormous bank of blooming mock orange on a side trail near an old concrete bridge about .75m before the end of the hike.

You're joints & muscles may be a little weaker that night, but your spirits will be stronger.
Linda

I suppose I did not realize how lucky I was when I did that hike last year.  There were still a few random patches of snow around (and the rattlesnakes were still asleep, but no flowers blooming yet) so I did not have to deal with the masses of irresponsible people out for a stroll on a nice day, just a few pleasant serious hikers.   The Giant Stairs were especially difficult to navigate with a dog who had to put four legs in positions they were not meant to be in (while shaking, poor thing) and she was not off her leash for even one second because no way was I going to risk her falling.  So for someone to let their children run amok on those boulders, I just can't wrap my mind around that.

On Daniela, thanks again for another great lead & directions.

And Shawnee wasn't the only one whimpering, btw. On Sunday, we watched your video of her maneuvering the stairs and climbing the 'real' stairs at the Women's Federation Monument.  We both began to tear up along with her just watching her!  DH said she deserves a big hug & congrats on being such a brave girl. I agree. Oh...and you do, too! :)

Here's another pic at the 'base' of The Stairs: 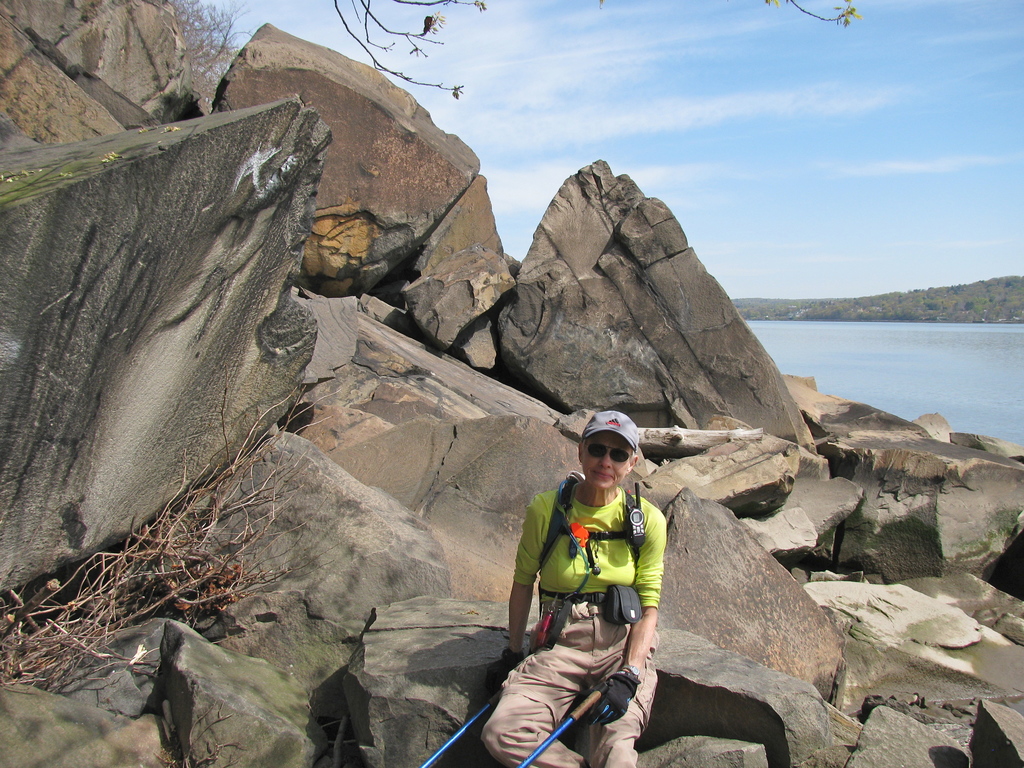 This is the bank of mock orange near the cement bridge I mentioned.  All our positioning around to get as much of the oranges as possible in the shot accidentally scared off two of the biggest bunnies I'd ever seen.  I think one could have answered to the name "Harvey"! 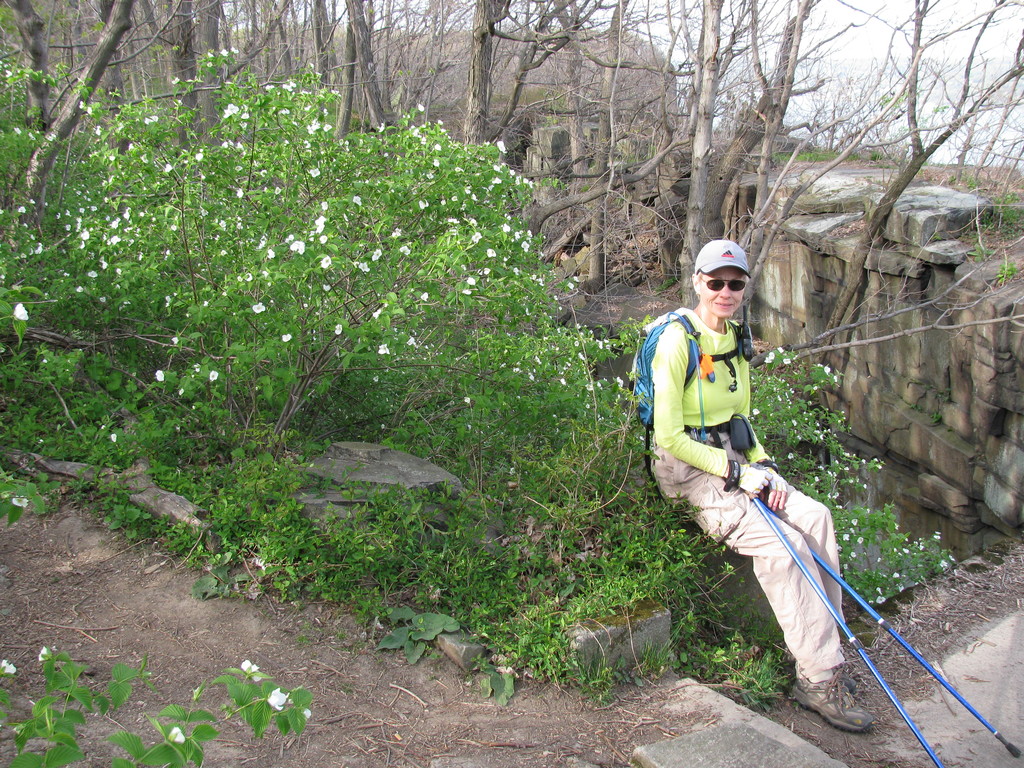 I believe the Giant Stairs was the Trail Conference's "hike of the week" last week - so that may have added some traffic to the hike, coupled with a really nice spring day.

Oh gosh Linda, if that made you and DH tear up, good thing you two didn't see her in the Newark shelter curled up in the corner in fetal position, shaking violently, almost 11 years ago.  She had no socialization at all and was terrified of everything, even me.  So her whole life has been a series of tough love tactics and not letting her get away with saying "I'm scared and I'm not doing it."  It is what has made her the outgoing dog she is today.  Just imagine that there was a time when I could not get her beyond the end of my driveway and now she hikes anywhere and everywhere.  What you don't see is after she accomplishes something she was afraid of, that tail wags a mile a minute like "Lookie what I just did!"  And of course tons of hugs and kisses go along with that.  So I am not fooled any more, LOL!  But seriously, I researched and debated a very long time before taking her on the Giant Stairs and almost didn't do it.  But then I figured what the heck, I could always turn back if need be.  Problem is, and I am sure you saw this, once you get going, you had may as well keep going because turning back is just as bad!

It's so ironic, Dawn.  This is the second time in almost as many weeks that the NY/NJ Trail Conference has highlighted trails we did.  Before The Stairs it was Totts Gap - Wolf Rocks.  I only noted they selected The Stairs this time after we hiked there.  Didn't know it was mentioned before we went.  Gee, and here I egotistically/presumptuously thought someone was leaking info to them like:  "Oh, The Franks did such and such trail this week...better highlight it next".  Don't buy that, eh?  Blaaahaaaa!

Daniela....ummm....so now I'm typing through tears. If DH reads this, well, suffice to say I'll have to console him, too.  We are both just huge piles of blubbery stuff when it comes to animals. Not that you need my affirmation, but I also think your tough love tactics w/Shawnee was super right.  It has paid off - and obviously continues to pay off - for both of you.  Her especially.  And, "Yes",  I can see that  "Hey, whut's the big woof, Mom?" -look in her eyes and that tail wag each time after she's climbed on ahead of you.