Been there and done them well over a year ago, but did each different than before, making them both seem like totally new hikes.  At Baldpate on New Year's Day we did the trails nearly in reverse (*see above Baldpate link*) from what we did the first time.  We also added areas in Honey Hollow that were closed for hunting when we were there before.  Plus we tacked on The Summit Trail 'loop'  for another 3+ miles which ultimately totaled nearly 9.5 miles.

We also vicariously participated in the Audubon Society's First-Day Bird Count by spotting this Red Tailed Hawk who ever-so obligingly turned his head for a photo op: 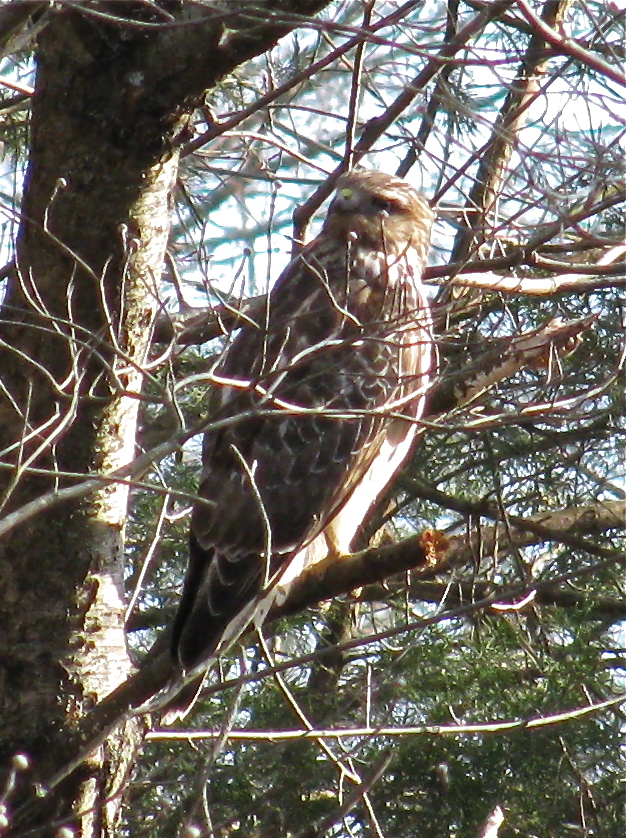 Previously we'd hiked a mix of yellows & green trails at Wells Mills, but Saturday we did ThePenns Hill Trail and totaled over 8-1/2 miles. (I also got to do a little trail running here since the terrain is so flat and soft from the layers of white and scotch pine needles that carpet the trails).

The weather reports kept threatening clouds and/or showers, but none appeared and for the most part it was somewhat sunny, extremely mild and quite different from the New Years First Day Hike we did last year: Snowshoe at Holmdel Park!!!

What a difference a year makes.  But we're still out there, walking, hiking, running or snowshoeing.  Still moving. And isn't that all that really counts for each of us?

Hope you all had a Happy and will have a Healthy New Year.

What a great shot of that hawk!  I always wonder how many eyes are watching as I hike through the woods - it's not all that often you get to see them.  Glad the rain held off for you.  I got stuck in it towards the end of my hike in PA yesterday before that same rain hit NJ later last night.   Happy New Year to you!