Someone told me a while back that somebody told them this was the worst hike they ever did.  So it sat at the bottom of my list for a very long time.  I was going to try it a few months ago but was told that most of the bike path needed to hike the loop was closed because of damage from Irene.  Since I was looking for a no hunting park for yesterday (Saturday) since today (Sunday) is much colder, I figured I'd call to see if the bike path had been reopened.  (There is no hunting allowed in any of parks in Rockland County, NY per the Rockland County Parks Department.)  I could not get an answer at Hook Mountain State Park.  I called Rockland Lake State Park and was told they are the correct ones to call for info since Hook Mountain's phone had been out since Snowtober and Verizon had yet to fix it.  The nice lady at Rockland told me the bike path was open "at your own risk" since there had been a lot of complaints about widow makers (loose limbs dangling up above) that they were not able to reach to get down.  When I got there I found the entire bike path to be in great shape and the only widow makers I noticed were up on the Long Path away from the cliffs.  Then again, I might have missed them because I was too busy looking for bald eagles up on the cliffs instead of loose tree limbs.  I local woman told me there are a lot of eagles from December through February and sure enough, they were there!

As far as the person who said it was their worst hike ever, they must have hiked there in the summer.  I can see where it would be crowded insanity in the summer with Nyack Beach, the bike path and Rockland Lake all converging along the hike.  In the winter, however, it was wonderful, even on a cold, windy, cloudy day.  There were several dog walkers, joggers, and a couple of bike riders on the first mile of the bike path.  All were very polite and pleasant (people and dogs).  Along the bike path section that had previously been closed I ran into a couple of joggers that had passed me before and nobody else.  The trail does become more rugged there, as far as a bike path goes, hillier and rockier.   The views along the Hudson couldn't be anything but nice.

A white-blazed trail connects up to the Long Path.  That trail switchbacks up very steeply with lots of loose rocks and leaves.  The turns are sometimes hard to see so you have to look for them.  Don't be surprised if you suddenly hear a train come out from underneath - there is a tunnel under the mountain very close to the trail.  You would think once you arrive at the Long Path it would be smooth sailing along the tops of the cliffs but no, it is constant up and down for the next 6+ miles - quite a workout.  You do need to exercise extreme caution along the overlooks and the edges of the cliffs - this is where a hiker and her dog fell to their deaths last February while snowshoeing.  I did not see another person for a very long time on the Long Path, then only a few hikers towards the end.   Looking at the map, the last part of the Long Path appears to run right next to Route 9W but it is actually much lower than the road so you hear cars but can barely see them. The last mile is a swampy white-blazed trail behind homes then a little bit of very low traffic road walking.  Overall, I really enjoyed this hike and it's going back on my list to do in the opposite direction, in the winter when there is no snow or ice. 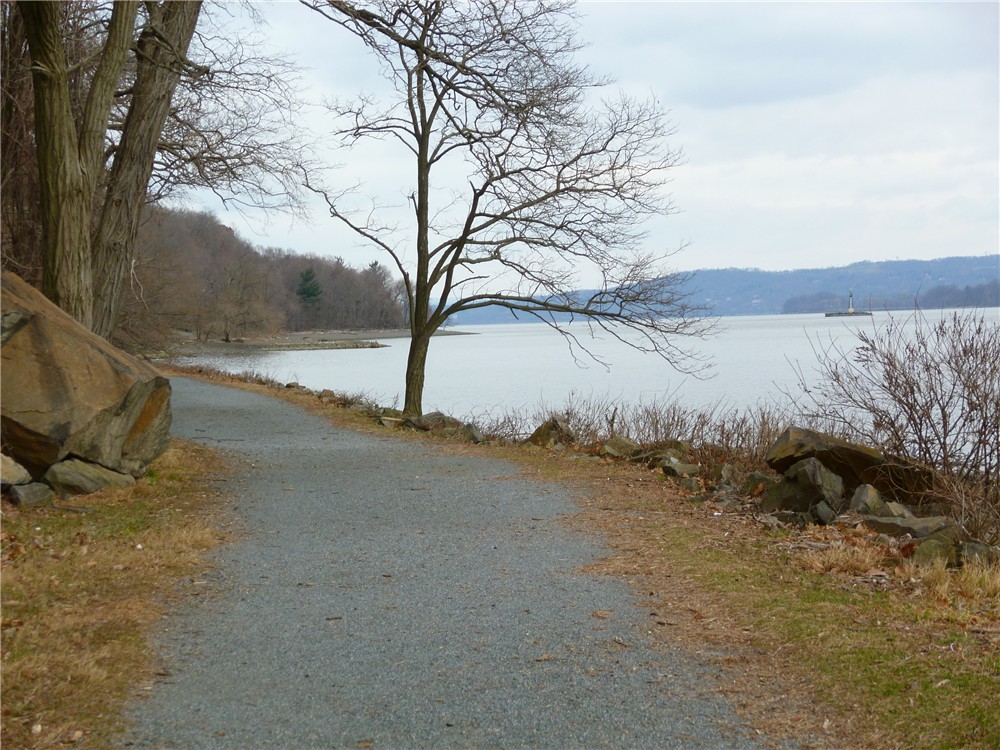 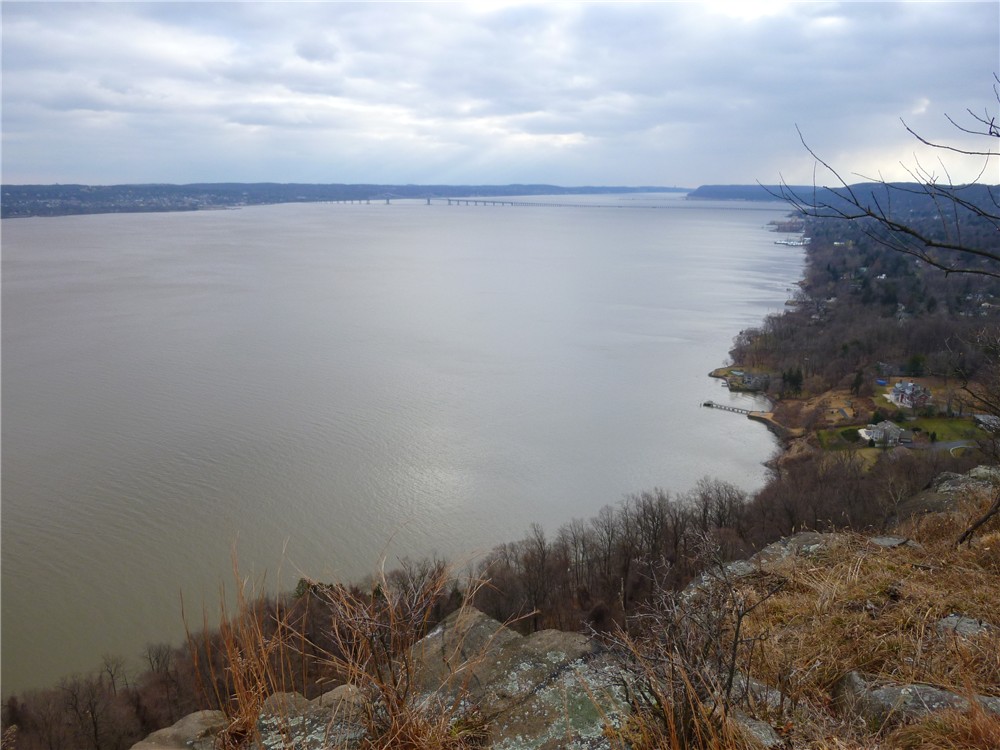 Daniela, You mentioned you'd go back again "when there's no snow and ice".  Were there any of either on the trails?  (Can't tell if the white stuff I see on the rocks in the pic above is ice or just mineral deposit.)

Linda - No, there was no snow or ice when I did the hike, just frozen mud on interior parts of the Long Path.  But it's not a hike I would do if there were snow and/or ice, just too dangerous under those conditions in my opinion.  It's a steep climb up on loose rocks from the bike path to the Long Path and then the Long Path goes right along the edge of the cliffs at times or you need to take side trails to the edge of the cliffs for views.  I worry about falling off on dry days with my fear of heights :)  If you want to go, give Rockland Lake State Park a call first and ask what the conditions are.  The lady I spoke with was very nice and helpful.  One thing to keep in mind is if you want to snowshoe on the bike path (worst that can happen is you slide off into the Hudson), the Nyack Beach State Park parking lot will mostly likely be gated and closed so you would have to park in Rockland Lake State Park if that is open, so worth checking first.