Arrived at the High Point X-Country Nordic Center around 9:00am on Monday. That day we did the 8km Tubbs Monument Trail from the base lodge,  around the rather precarious shoreline of Lake Marcia and up to the monument.   When we hiked this trail several years ago in the fall, we did it in reverse and started from the monument parking lot.  This time of year that parking lot is closed, so you have to start at the much lower down at the base lodge which adds on some kms and makes for a steeper climb up.  The previous day (Sunday) had been super, super windy and the drifts created higher up on the trail found saw us sinking up to our knees - snowshoes or not.  Icy in spots - also due to the stiff winds that were still present this day at the highest elevations. But reaching the summit was bee-ooo-ti-ful and worth every step of the way. 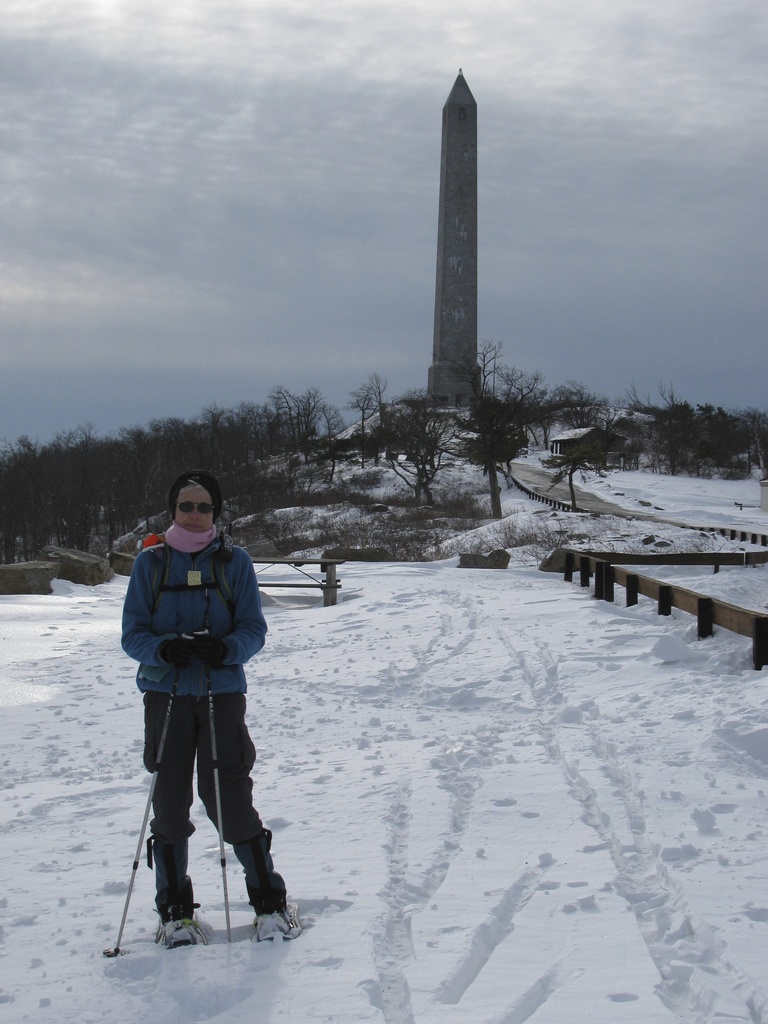 New Year's Day started out with flurries and progressed to more formidable flakes once we started out on a variety of loop trails that intersect along the 20+km of trails at the Center.  The snow abated once we reached the Nature Center off the Steeny Kill Trail up from Steeny Kill Lake, but the winds picked up suddenly.  When we went out to a very exposed overlook, it was all I could do to keep upright.

This mini-vacation was a terrific way for us to have spent the holiday:  Shoeing out the old year and shoeing in the new.

High Point X-Country Nordic Center is a fantastic gem here in N.J.  When there's little or no snow elsewhere (ugh...like where I live), there's usually some base up there.  Plus when it's cold enough, they make their own snow on certain section of about three of their trails.  If anyone's interested in staying overnight, btw, there's a motel about 10 minutes drive from there.  The High Point Country Inn. Old-style motel.  Quaint.  Perhaps not up to the standards of those more accustomed to the big chains.  But if you like old-style, quaint, very, very clean and CHEAP...then I recommend this place. Wonderful, hospitable and friendly concierge and his dog, Murphy.  They're pet friendly, comfy, firm beds, wifi & the much-needed heat & hot water is plentiful.  Only thing to note is they're away from any towns (Sussex is about 12 miles away),  have no phone, hair dryers or coffeemakers in the rooms.  But there are microwaves & fridges.  My cell was fine in lieu of a room phone; my hair is so short it dries by itself; only the lack of coffee struck terror in me.  Solution:  Instant coffee packets in heated microwave water.  Voila!  A little caffeine, freshly-fallen snow and some brisk cold air and I'm Shoe-Worthy!

What a great way to shoe in the New Year!  Your pictures are gorgeous.  You don't take your coffee pot with you?  I never leave home without it!

Linda - looks like a fantastic trip and a lot of fun. And I appreciate the lodging details - very helpful.