Spent the Weekend up at a Cabin at Stokes. Great time of year to be there as Spring gets into full gear! Spent Friday (5/3) mainly exploring/shooting through the SW (of 206) section. Hiked to Hidden Falls and Buttermilk. Great to get to Buttermilk on a weekday and have only a few people around (as opposed to the weekend hordes). After that explored more in the DWG park, including Walpack center, and NPS 615. 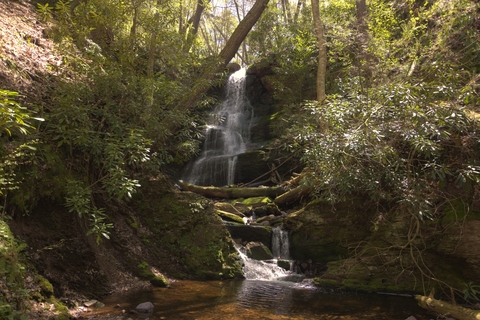 It was the first time I've ever been up to Blue Mountain Lake, which is interesting, but am saving Crater and Hemlock for next time. 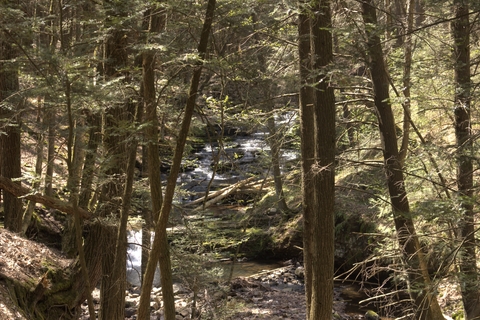 Why this area isn't as popular as Tillman beats me.  After perhaps a half mile, you then hit the Silvermine trail which isn't as nice as the first two. It starts with a steady gain in elevation. Finally you've broken a sweat! After about 25 mintues you hit a side trail to the actual silvermine, and I was certainly underwhelmed by the mine itself. It is strange realizing that this forest that you thought was quite natural and pristine was in fact a center of commerce 140 years ago, though!

Mysterious Infrastructure in the Middle of Nowhere! 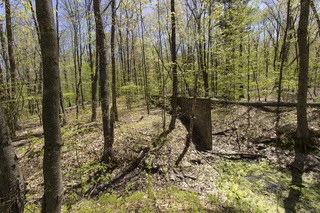 The last 45 minutes of the trail gets rocky, and after passing the remnants of an uncompleted damn project from the 1920s you hit a very rocky descent (and wonder about rattlesnakes) and hit the original Blue Mountain trail and backtrack to the start.

Spent the rest of the Sat and Sunday enjoying the cabin, eating and shooting around Ocquittuck. Did make it up to Sunrise Mountain both nights hoping for some decent shooting, but it's quite hazy (not sure if that is weather specific to when I was there or a year round thing, but didn't translate to DSLR very good!

Was a great trip overall and Stokes and the surrounding area (High Point/DWGNP) are in my opinion are as good as it gets in Jersey. And you can't beat the night sky up there!

Thanks for reading, hope to update soon with more adventures

Enjoyed your write-up. I seldom visit Stokes, and was unaware of the Silvermine. I like finding old mines, so this goes on my "to do" list.

Brom - Thanks for checking my post. I believe there's a lot of mines up in Sussex County to check out. There's some more info on the one in Stokes here:  http://www.abandonedmines.net/snook.htm

Nice post TJ, I stayed at Cabin #4 a few weeks ago and Hiked a few AT Loops including Holly Springs...

Anthony - I like that #4 is lakefront (never been in it), but I'm really aiming to get in 5 or 6 next year. I think this new NJ Camping online reservation system might be in my favor, as I'll be lurking on it like an ebay bid ready to pounce as soon as it's available!

Anthony -  I was in #11 (the first one on your left when you enter the cabin area). Last year I was in #2. It was the first time I ever stayed overnight at Stokes - I had heard the cabins were nice but impossible to get into.

I like #11's layout with the kitchen/bathroom on same side and fireplace on opposite side vs #2 where the kitchen and bath are opposite each other.  I'm into photography so the waterfront ones provide a lot more "scenery" to shoot. Also #2's Outside area (I guess it's backyard! facing lake) is quite sloped and eroded, not to mention it's not my favorite entrance way for my 4 cylinder Honda. 11 has nicer fire/picnic area, but you're in the"front yard" for all to see and additionally you have car traffic on Flatbrook Road behind you, which takes a little from the experience.

Thanks for the write up and nice pictures TJ.  I'm looking forward to getting out there some day soon.

Comment by TJ Karakowski on May 29, 2013 at 10:53pm
Trailblazer- thanks for you comment. I dont know much about mt olive, but spend alot of time ice fishing at Budd Lake. Shame about that kid that died in in January. anyway, I see you're a youtuber, my stokes vid from 2011 is here if interested.

TJ, you are a very talented videographer and editor.  The only downside...now I want to play hookie from work and get my butt up to Stokes for the day.  :)