Headed out on Sat (6/1/13) for my first "serious" backpacking trip (a few years ago I lugged way too much weight 3 miles into Round Valley on an ill-fitting cheap pack and vowed to never do that again!). I've done my homework and bought some better equipment now.

Started at Kittatinny Visitor Center (off Rt 80 in NJ at Water Gap) at 9:15 and was already sweating by the time I hiked under 80 and hit the Dunnfield/AT Trailhead. Spent the first hour sweating and cursing on the humid upclimb, but started to get into the Zen around the Holly Springs/Beulahland trailhead (roughly 10:20am). The cicadas started chirping, and I might have actually found myself smiling there for a while! Around this point I passed a crew of trail maintenance volunteers carrying pics and shovels up hill (it was Trail Days after all) and made a note to myself that I have to go out at least once a year and give back, as the AT is well maintained, mostly via volunteer labor. I also further noted to give back on a cooler day in the spring or fall, not a 93 degree day! Anyway, hit Backpacker #2 around 11 and was cruising as I knew that it was mostly level or downhill from here on out.

Getting my Thoreau on at the "Backside" of Sunfish 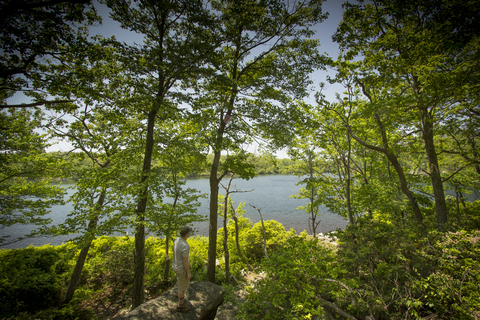 Found 10-15 people at Sunfish, mostly families and couples. I’d always thought Sunfish was overrated (am partial to Surprise), but I have to admit, I never bothered to go to the eastern/ northern end. I usually just got to the plaque, drank a Gatorade, snapped a pic and descended or went to Dunnfield to loop out.

Got moving again at 12:30 and hit the Garvey Springs (Orange) trail that heads down to Worthington. The upper half has lots of small rocks, and I actually slipped and fell, although not that badly. The flora around here was very green and "dank". Fortunately the only fauna I saw was a tiny little snake on this trail, but I was really expecting to see a bear on this side of the mountain. Well, also ran into 2 separate young couples that I presume were coming up from Worthington to hang/swim at Sunfish. They looked much younger and fitter than me and I would not want to attempt this with the pack yet!

It was a quick hike down and I was on Old Mine Road by 1pm.  Hiked into Worthington to the site I had reserved earlier that morning and took that pack off! Was done hiking by 1:30. 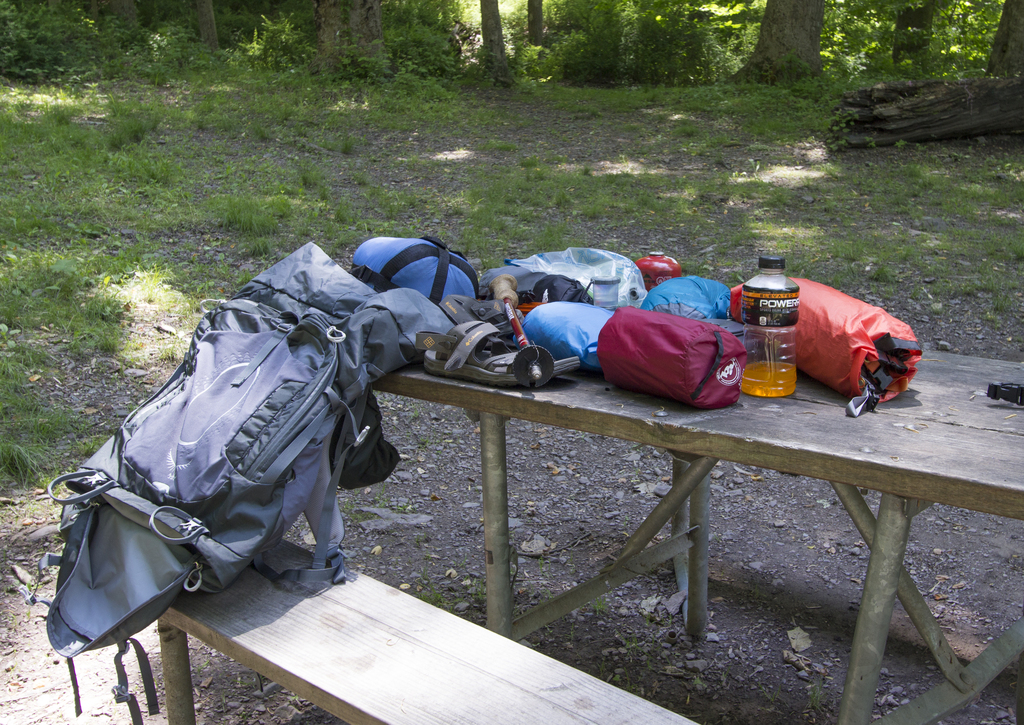 Spent the rest of Sat hanging out/ shooting/recovering around Worthington where my father met me and I converted into a car camper (i.e. had steaks/drinks for dinner and 10lbs of photo equipment that I didn't hike with)

Worthington SP is pretty cool. Last time I was there was about 25 years ago with I was 10 or 11. I had grown to think of it as "Bearington" from the reports, but felt safe/fine there. I noted there are 2 types of campers from general discussion. Those that claim they want to encounter a bear, and those that know that they don't want to see a bear (unless it's at the Bronx zoo!)

The southern end of the park has the nicest sites that are wooded with good river access. Going north, past the main entrance, you pass the group sites and a few tent sites that are also nice, but far from the showers/plumbing. Several of these were open, and I considered ours (#31) a decent walk-in find. The northern most end, is basically a huge field that seems to cater more to the SUV, pop-up, tail-gating crowd. It's not my scene, - and a major problem with these sites is sun exposure during the day and complete lack of privacy. However at night they must afford an awesome view of the sky.

Sunday explored a bit (via car) of Old Mine Rd, including the Copper Mines and Millbrook Village. Also made it up to Crater Lake finally for a quick peek where my Dad played up his "bird watching" hobby.

Crater Lake @ the End of Skyline Drive (I cloned stamped a bit to create the scene I wanted - but there was 20+ folks there swimming/picnicking). Many college aged and in bikinis. 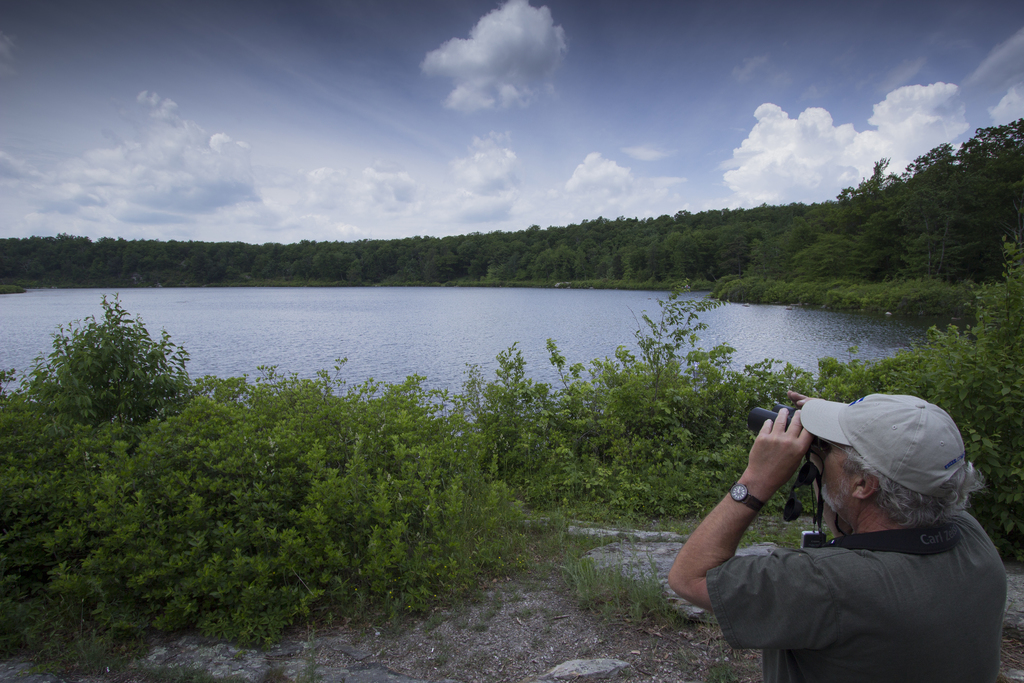 Was on the road and back to civilization by 3pm Sunday.

Total Hike Length – Kittatinny Visitor Center to Worthington #31. About 6 miles, a little over 4 hours with breaks and 20 minute lunch (AT- 4.5, Garvey-1.2, Worthington .3 +/-). I'm out of shape! But I didn't "kill myself" and did stop often to shoot pictures and take in the scenery (and rest/hydrate)

Stayed Overnight (as walk in, no Reservation) at Worthington in central section at Site #31 for $20. And they sell a great bag of wood for $7 - get two!

NYNJTC Map #120. This (4) map set covering the Kittatinny Ridge, will be the best $15 you'll ever spend on hiking equipment. A good pair of hiking socks costs more, and won't last as long.

Conclusion: Good hike, and overnight at Worthington. I have a general game plan to break myself and equipment in so I can attempt some multi-night trips in the fall and future. Hoping to do a 5-6 mile Round Valley return or Waywayanda AT section later this month.

Thanks for another good write-up. Interestingly, my only encounter with a bear in the Water Gap was on the Garvey Springs Trail. About halfway down; we saw each other at around 100 feet apart. I stood still and the bear took off in the opposite direction, at a pretty good clip.

We've had bears wandering in our back yard for years, so it was nice to see one "in the wild".

Brom - Cool thanks for checking it out. The only wild bear I've enocuntered I was stuck at that long light on Old Mine Rd (in a car!)- same deal, I mostly saw his butt as he took off.  But you've confirmed my suspicions that the area is "beary" with all that moss/fern kinda open vibe.