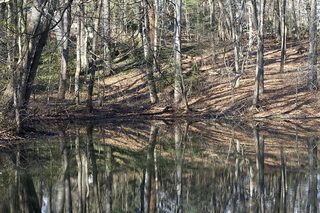 The Woods of Wenonah is a U-shaped wooded area that surrounds the town of Wenonah. It has several short trails, with access paths that lead off into neighborhoods. It's not remote by any means, as houses are visible along most of the route. It's a nice little park though, and we felt the Comey's Lake area was the prettiest part.

If you are in the South Jersey, this is certainly worth a visit. It's hillier than you usually get in southern Jersey, and it's not in the Pine Barrens. For those in north Jersey with all the rugged hiking surrounding you... it's probably not worth driving down to this park.

The trails aren't blazed, but marked with signposts at intersections. There are a few spots that it was a little difficult to figure where to go, so we recommend picking up or sending for the trail map.

Miles: 6.0 - [This is combining every trail, most individual trails are under 1 mile.]

–-Detailed hike info found on our Woods of Wenonah page.