Return to the Valley

I mentioned in my previous post, that back in 2010 I dabbled with backpacking by hiking into the Valley about 4 miles with 45-50lbs of gear on a cheap pack. And when I hobbled out and was practically bedridden with soreness for a few days afterwards I hid that pack in the basement and didn't even day hike again until 2012.

I returned to Round Valley on Friday (6/21/13) to redeem myself and celebrate the Summer Solstice. I was hoping that a strong will and a Visa bill full of newer lighter EMS gear would renew my outlook on backpacking. My hiking partner was Uncle Jim - my Dad and cousin Will boated into the camp area and met us out there. I carried in all my gear and food which weighed in at 37 lbs (and yes I ate very light and very un-fulfilling noodles and granola bars, while my family enjoyed kielbasi, steak, and hot dogs).

Started in on the Cushetunk at 9:30 am. Beautiful day, 70's and not too humid. We were making very good time, as my uncle (an ex-marathoner and extremely fit 60 year old) whipped my ass into gear and didn't stand for my dilly dallying to take flower pictures. I knew in 2010 the area 1+ mile in and next to the fence was a real b*tch because it was quite eroded and difficult to descend - but it's been repaired and was much better (although going down is the easy part!) At the bottom was probably the best view of the trip (at least in the summer when the vistas higher on the mountains are leafed over)

We reached the trail split between the Camp Access Trail (henceforth called the "Jeep Trail" in this blog)  and Cushetunk by 10:45. My game plan coming in was to take the Jeep Trail if I was struggling at this point, or continue on the Cushetunk if  I was feeling good. We were both feeling fine, so we stayed on the Cushetunk.

There's an initial ascent for about 10-15 minutes but after that it's really not a tough hike. [ASIDE: I hiked out (on Sunday) via the Jeep Trail and honestly I think that it's is worse for some reason (could be psychological and/or weather).] The scenic outlooks on the Cushetunk were very overgrown and there were a lot of trees down from Sandy so I was underwhelmed by the trail experience. I'm guessing that it's a much better hike in the Fall or Winter when the leafs are gone.

Spent the remainder of Friday, and Saturday fishing, hanging around the site, enjoying the campfire and catching up with the family. 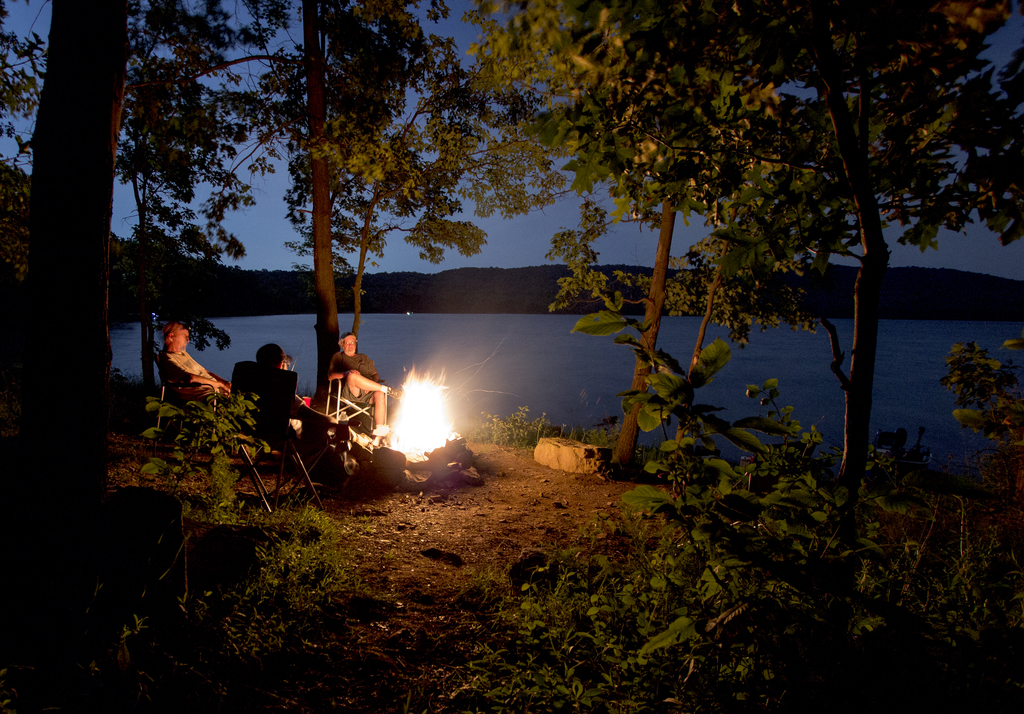 Did some day hiking through the campground on the Southwest side (closest to park entrance) and all of those sites are closed down due to Sandy damage. There were some squatter campers in a few, and the pit toilets seems to be intact (and stocked with paper), but I'm willing to bet that this end is going to fall into disrepair and never open up again - could be a good thing or a bad thing, I guess we'll see how it plays out.

I also checked out the Cushetunk from the access near site 59 heading north, but after about a mile there's signage advising the trail is closed from January to August 1st, as it's a Bald Eagle nesting area. This far end of the trail has been noted as being the best hiking section (view/remoteness wise) and again, something to check in the Fall.

So after two beautiful days out there, it was time to head out on Sunday morning. This time I was on my own though. Left the site around 10:45, and between it it being hotter/more humid and being hungry and weak after two days of eating granola bars and noodles, I took the Jeep Trail as far as possible to avoid climbing up the Cushetunk. Took until 12:30 to reach the end of the sites (and yes I dilly dallied and took pictures of flowers and chipmunks, etc). [ASIDE: Word of advice to future hikers heading out of Round Valley: If you're curious what site 1 looks like when you hit the first Cushetunk trail juncture at site 3-4  and have to decide straight or left, choose left. I somehow thought the photograph of a lifetime might be down by site one, but it turns out it's just another campsite in the woods, much like the other 83. And as a reward for my curiosity, the trail turned hard left and straight up at 45 degree angle.] I huffed and puffed up that mountain, passed the Boy Scout Area and  reached the section at the backside of the damn (pictured on top).

If you're looking backwards at this, you've made it! Cheeseburgers are 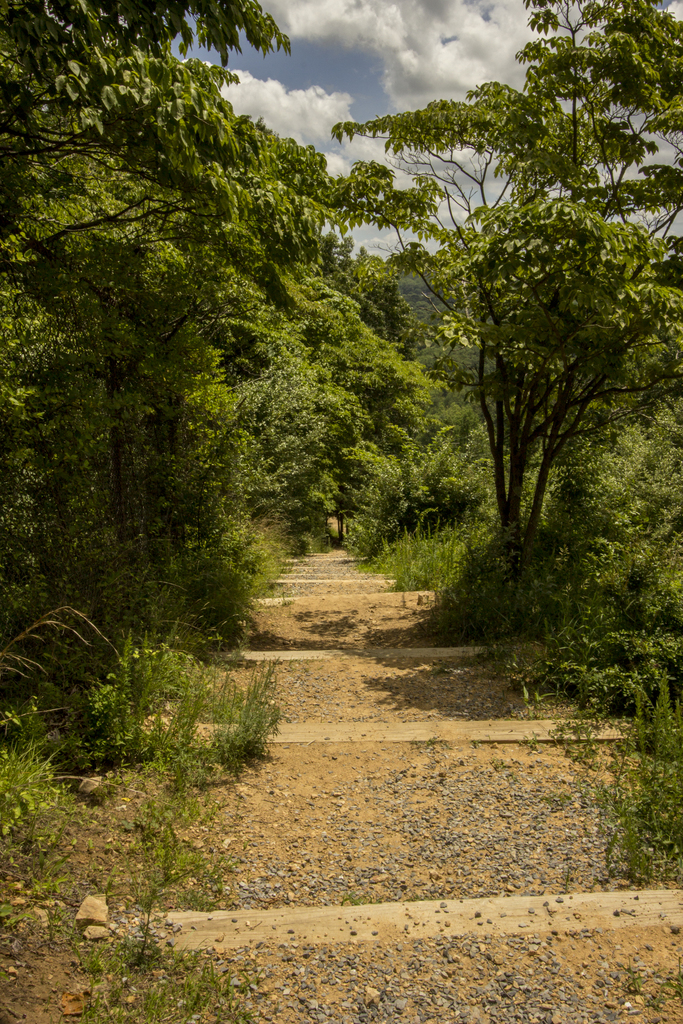 Here's where the real joy of this hike comes. The long ascent climbing along the fenced in area around the damn. I had flashbacks of 2010, but the new equipment made it doable (although still unpleasant). The remainder of the trail wasn't too bad and I started running into more people, trail running, day hiking, and mountain biking.

Made it out and to the Campers Parking Lot, intact and with a sense of redemption around 2pm. And I'm already thinking about backpacking Harriman in July sometime!

Round Valley is a great park, and obviously being that you have to hike or boat/canoe out to the sites, you get a different experience than the usual car camping sites in NJ. Sites 1 thru 47 are now closed down due to extensive tree damage. As recently as 2009 they were going to completely close out Round Valley, and something tells me that this end might never open up again to legal camping. Sites 48-84 were, by and large, full with a mix of college aged partying groups, couple backpackers, and dirty old men (that would be my crew!). There are only 2 working water supplies currently in operation out there - pumps at Site 77 and site 7. So your best option might be the 5 billion gallons in front of your site if you're going to purify it.  There's seems to be a general sense of "lawlessness" out there in my opinion. When I was a kid and came here, state or park cops would come through a few times a day and even pop in on your campsite day or night to see what you were up to. On this trip there was no sign of cops Friday or Saturday, and the fuzz only showed up on Sunday after an apparent altercation with some crazy drunken Russians (no, not my crew, we're Poles) resulted in a camper calling 911 for help. (This was trail talk with another hiker, not fact witnessed by me - but the cops were not out there, as you can hear them driving on the jeep trail). There were guys setting out traps with fishing nets overnight (probably illegal), running 50+HP outboards (9.9 is legal limit) and lots of obvious drunken annoying loud behavior all night (no drinking in state parks & quiet hours 10pm-6am). I'm no fan of snooping cops, and I've been know to sneak a beer to two (or ten), but I just hope that some idiot doesn't burn down the place or shoot a bald eagle or do something that causes the state to say, enough is enough, RV is closed down.  It's too expensive to operate and you can go car camp at Spruce Run 10 minutes away, because that's easy to patrol. There's a world of difference between the two (want great fishing and a shower every day go to Spruce Run - want to camp/hike and use spider infested outhouses - go to Round Valley). And I'd like both options to be there for a long time to come.

Comment by Hank Hall on July 23, 2013 at 10:45am
Interesting post. I've been hoping to camp at the Valley for a long time. I live in High Bridge so it's almost literally in my backyard. Since we moved here in 2008 I have noticed a dropoff in the presence of park police/rangers. They used to be a fairly common site walking the family trail on the east side of the reservoir where we take the dog to swim. I can't say I've seen a Park Police Officer on the trails in two years and we go quite often. I'm a little put off by your description of the camping area-seems like it was pretty rowdy back there? I wouldn't mind it if I was going for a weekend with my fishing buddies, but with my wife and daughter I'm not keen on the idea of running into a bunch of drunks. You mentioned "squatter campers"-was it your sense that they had hiked in without reserving a site? If so I wonder where they left their cars without getting tickets or prompting someone to come look for them?

Hank - You get all sorts out there, but I don't think there's anything to worry about (ie going with your wife/daughter vs with your fishing buddies). The biggest concern is if you happen to end up camping next to "partyers" that intend on drinking all night. That's the luck of the draw I guess.

The squatter campers were all-hike ins as far as I could tell. Or perhaps they kayaked or canoed in but I didn't see boats by their sites.  They might have paid for a site, but just choose to camp on this end. I didn't converse with any of them.