We hike on New Years Day every year - it's a great way to kick off the new year. Weather was cloudy when we started out but not windy. The sun came out around noon and it got up in the mid-40s and was very comfortable.

We did the WHITE blazed 8.4 mile Penns Hill Trail, in roughly 4 hrs. There are other trails that allow you to make shorter loops. The hike starts behind the visitor center and is very well marked, there wasn't one instance where we questioned which way to go. Get the… Continue

When I arrived at Ramapo Valley County Reservation at 9 am there were already about a dozen cars in the parking lot. (Parking lot is HUGE with plenty of parking.) The snow, which was fresh from the day before, was pretty heavily trampled. About 2 miles out the snow was untouched for several miles so my dog and I were the first to walk on it. That is when you know you are alone and the only… Continue

With a ton of snow predicted and it already flurrying with a dusting by 8am, we scrapped plans to try and squeeze in a longer hike before the snow hit. We headed for a short hike at Helyar Woods, a small parcel of woods adjacent to Rutgers Gardens, in New Brunswick. Of course the snow stopped as we arrived and didn't really kick back in until 3pm or so. Oh well.

Map of the Gardens with the woods indicated, but… Continue

Located in Union County. Parkway to 78W, exit 43... directions here. Park map here. The Trailside Museum at the main parking lot is open 12-5 and is very nice. Other restrooms were open earlier in a nearby building, follow the signs from the lot.

Did the Sierra Trail, an 11-mile loop around the perimeter. We have mixed feelings… Continue

South Mountain Reservation (Millburn/South Orange/Maplewood) does not allow hunting (except starting 1/19/2010 on Tuesdays and Thursdays for three weeks) so with Sunday having freezing rain and sleet forecast, this was a good option to get in a weekend hike on a Saturday. The terrain is very… Continue

Maurice River Bluffs, Cumberland County in South Jersey. - A short, pleasant loop through pinelands along the bluffs by the Maurice River. This park is in NJ's Coastal Plain. If you are used to hiking in northern NJ, this is quite a change in scenery.

What a difference a day makes. Yesterday snow and today bright and sunny. We set out for a short hike nearby to take advantage of the sunshine and picked Washington Valley Park. A nice little park with several different sections to hike, We chose the middle section by the reservoir and got off the blazed trail and climbed what I believed to be an artificial 'mountain' built from tailings from the rock quarry next to the park. Somewhere behind Irina in her picture from the 'mountain' top is… Continue

Wells Mills County Park is an absolutely delightful park. According to the signs posted no hunting ever in this park. Surprisingly, there are plenty of hills to climb and even ridges to walk along, something you don't generally find in the Pinelands.

It is very easy to get to. Exit 69 off the Garden State Parkway going either direction, left on Wells Mills Road (route 532) for 2.5 miles, park entrance on the… Continue

I love when it snows on my birthday, cant abide it the rest of the time but on 12-5 I'll take it. I love to hike in snow on my birthday. I love to hike with Irina. So when we set out for Norvin Green under grey skys the stars were lining up just so. The snow started falling about the time we were pulling into the parking lot. We bought a trail map in the Weis ecology center and lit out. Within a half an hour the snow was coming down at a good clip as we made our way up the mountain. Reasonably… Continue

This busy weekend we headed to our favorite go-to park when we don't have a lot of time to drive to something longer: Cheesequake State Park. Did a quick 4.3 miler that combined the YELLOW, BLUE and GREEN trails. It was a nice day, but you could certainly tell that winter is coming - was glad I grabbed my fleece at the last moment.

A lot of the park is marshy with boardwalks.… 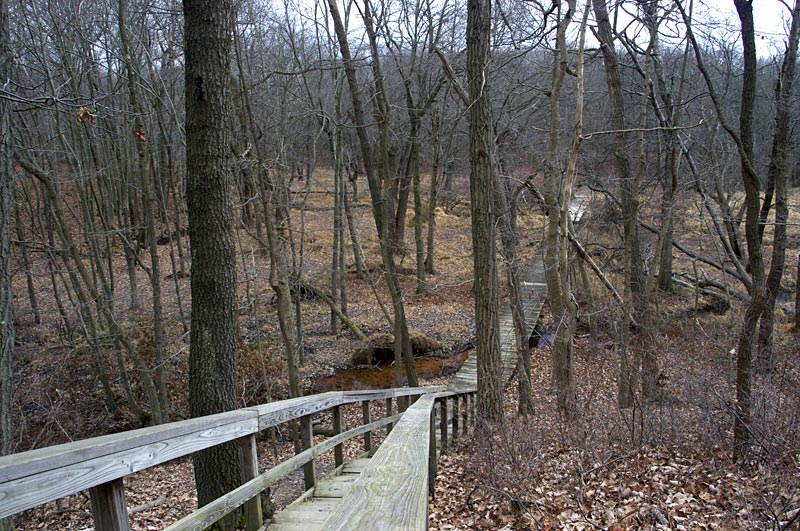 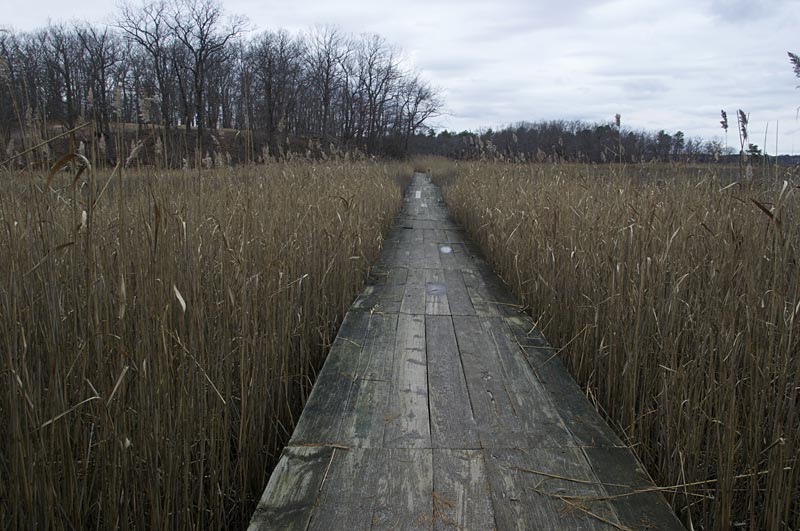 I received the Wharton State Forest maps I had requested from the State Park Service this week. They sent some very nice, detailed maps. So we headed south. It's been a while since I hiked in southern NJ and my memory of that was being attacked by biting flies the entire time. None of that this time of year! The park has many tick warning signs posted but I didn't see a single one so hopefully they are… Continue

Getting High at Lunch

I work 5 minutes from Mahlon Dickerson Reservation and enjoy walking the trails at lunch. I guess I can say that at this moment in time.....I was the highest person in Morris County. :) 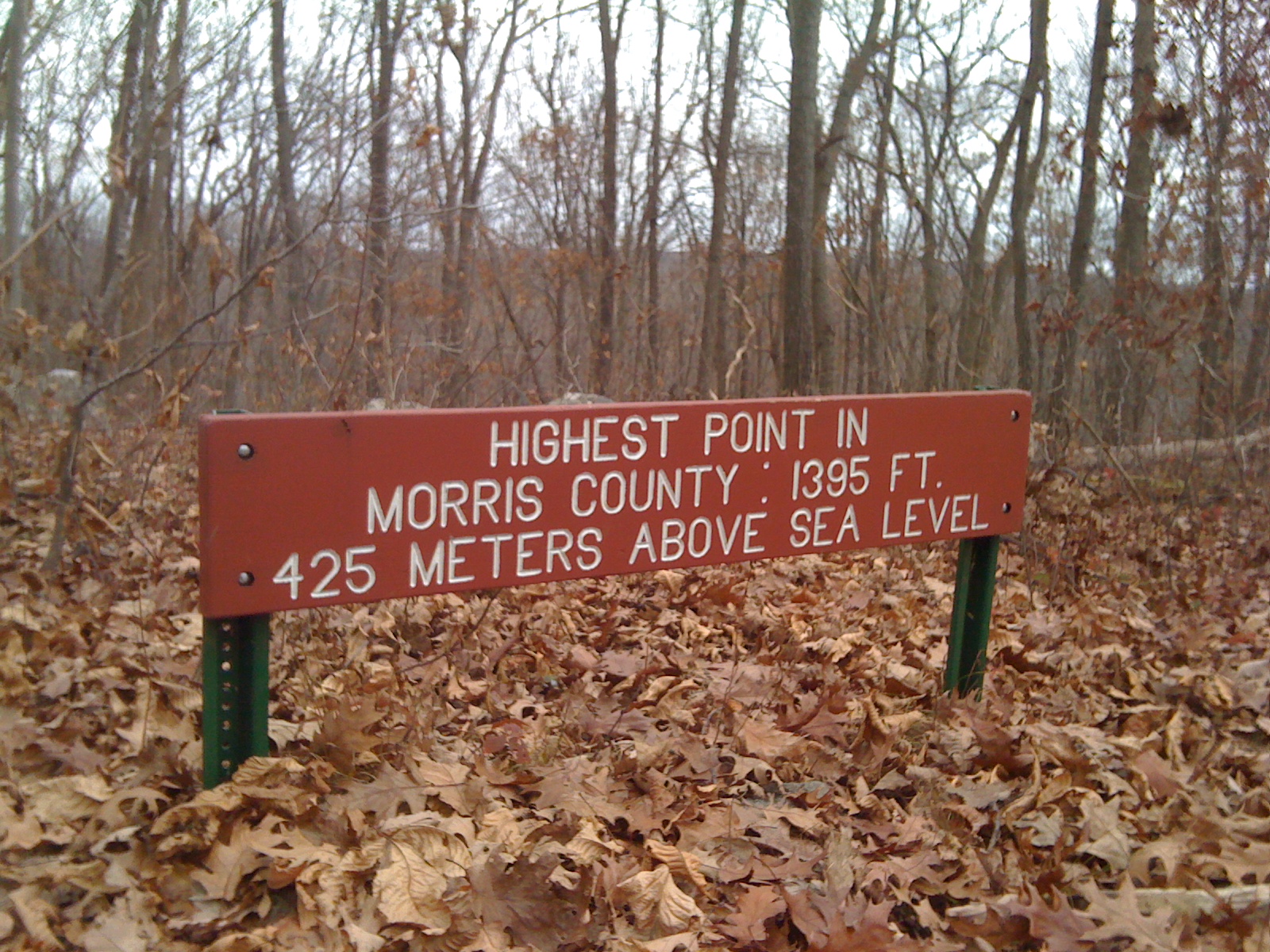 Hiked two small and easy parks in south, south Jersey. Both parks have rock-free trails that are characteristic of south Jersey so you cover ground a lot quicker. Lots of pine trees, and some cedar at the Bluffs.

Maurice River Bluffs - 2.6 miles in about an hour. Pleasant trails through pine and cedar, with views of the Maurice River. A few minor rolling hills. I did the Mount Tammany/Sunfish Pond/Dunnfield Creek hike and it was fabulous! Got there at 8 am and there were already many cars in the parking lot but only passed one couple on the red dot trail going up Mt. Tammany. The only problem with being there that early is the clouds were very low and obstructed the views but it's still neat to look down on… Continue

We went over to PA to hike The Pinnacle. It is normally an 8.6 mile hike but since it is so hugely popular, we decided to take the back way and park near Hawk Mountain which made our hike 12.8 miles, but a little less crowded than the AT going to and from the Reservoir parking lot in Hamburg where most people park. It took 1 1/2 hours to get there from Central Jersey. The… Continue

Headed to the Farny Highlands to do a northern section of the Four Birds Trail that we hadn't done before. (Four Birds is 19 miles in length, one-way) This part of the trail is part of the Pequannock Watershed and requires a permit (altho the other 4 cars there didn't seem to have a parking sticker so not sure how much that is enforced).

There was significant leaf drop which totally obscured the trail. It was well-blazed but still hard to follow due to the leaves. A gentle uphill of… Continue

Has anyone tried a "Buff" as winter headwear?

The have a Polartec one for winter, and it seems much more versatile than a regular knit cap. I was curious if anyone has ever tried one, and if they liked it. You can see what a Buff is on their site, and a quick video really explains it best here.

They even have them for… Continue

Headed to Harriman because it was Saturday during hunting season. (No hunting at Harriman at all). Parked at the visitor center and was surprised to see it packed since it was raining out.

Trail conditions were really slippery so we chose a mostly level trail and did a 7.2 mile loop around Pine Meadow Lake. This is a really pretty (and popular) area, as the trail follows a lovely brook to the lake and back. The leaves were past peak, but nearer the water there were still vibrant… Continue