This hike is about half way between Frenchtown and Lambertville on the Pennsylvania side of the Delaware River.  If you aren't familiar with this area, you will be amazed at the unexpected terrain.  Tohickon Valley is a deep gorge with amazing vistas that can't be captured adequately in pictures.  This hike is easily overlooked because it traverses Ralph Stover State Park (45 acres with 1 mile of hiking trail) and Tohickon Valley Park, a Bucks County park (612 acres with any hiking…

I was very pleasantly surprised by this hike.  There are the typical packed sand roads of the Pine Barrens through cranberry bogs but most of the red-blazed trail and part of the yellow-blazed trail are designated for foot traffic only.  These are very scenic foot paths through cedar swamps, along canals and rivers and through dense pine forests.  It made for very nice hiking and the constant green of the pine trees infused color into an otherwise dreary day.  There are a lot of swampy areas… Trails here are super easy - flat, level, packed sand typical of Jersey's Pine Barrens. This park is more of a 'hey let's go for a walk or have a picnic" kinda park and not a remote hiking destination but it's worth a visit. A big highlight of this park is the long section of boardwalk called the Pine Swamp Trail.

The trails are not really blazed, there are… 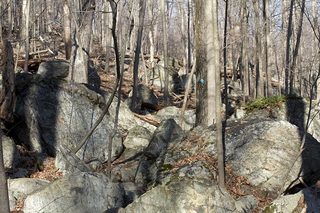 For our annual New Years Day hike we ended up at Mahlon Dickerson Reservation. Many people had the same idea, whether it was to take advantage of the unusually mild (low-50s) winter day or maybe getting an early start on a New Years resolution to exercise more.

Someone told me a while back that somebody told them this was the worst hike they ever did.  So it sat at the bottom of my list for a very long time.  I was going to try it a few months ago but was told that most of the bike path needed to hike the loop was closed because of damage from Irene.  Since I was looking for a no hunting park for yesterday (Saturday) since today (Sunday) is much colder, I figured I'd call to see if the bike path had been reopened.  (There is no hunting allowed in… 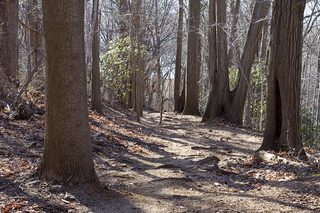 We took a little time off around the holidays so of course we needed to get some hikes in. Since it was a weekday we wanted a park that was no-hunting (though it is closed a few days in December) plus we didn't feel like driving far so we decided to hit up Hartshorne Woods Park in Middletown.

Between the busy holidays and all the mild-weather hiking days, we've gotten a little behind on our hike write-ups!! 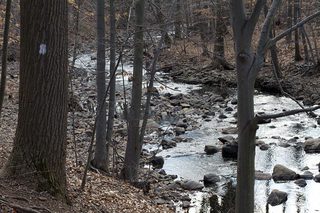 With mild weather in the forecast for Jersey – in the mid-50′s in December! – we had to go hiking. Sometimes, you just need to ditch things and go for a…

My dog has Monday chiropractor appointments out in Riverdale - exit 53 off of I-287, smack in the heart of hiking country.  I have taken advantage of that by taking a half day off work and combining her appointment with hiking at some of the smaller parks that I never get to because they are too far away for the amount of trails available.   Today we checked out the new white-blazed trail at Silas Condict Park.  It's only a 3 mile hike but it's a very rugged and scenic trail with huge rock…

We're bummed we weren't able to take advantage of the beautiful weather on Saturday (prior commitments). But Sunday's weather was almost as good albeit a bit more cloudy toward the afternoon where we were in Mendham, NJ at the Schiff Nature Preserve.

Been there and done them well over a year ago, but…