Easy loop through pine and deciduous forest, following along the Manasquan River briefly.

The forecast was calling for a windy and super cold day plus we only had time to get a quick hike in. Somehow we always end up at Turkey Swamp when its freezing or the ground is snow covered.

The forecast was spot on - with the wind chill it felt like 8-10 degrees out. With the right gear however, it's not really an issue. (For help with cold… This route takes in Ramapo Lake, Van Slyke Castle ruins, plus views of the surrounding area and of NYC.

Ramapo Mountain State Forest, located in Bergen and Passaic Counties, contains a popular, extensive network of trails. It’s easy to create loops of any length and there is a lot to see, even on a short loop.

This is a very, very popular area, especially going to…

Pinnacle and the Pulpit – Appalachian Trail Hike a rocky route with two amazing vistas along the Appalachian Trail in Pennsylvania. Enjoy the expansive view of the surrounding hills, the Kittatinny Mountain ridge in the distance, and the patchwork of farmland in the valley below.

Our two cents: While this hike is absolutely a "must-do" on any NJ-area hiker's list, it is… Several nice viewpoints along a figure-8 loop that starts on the Appalachian Trail in High Point State Park and returns on the Iris trail, an easy woods road.

Mileage: 9.1 miles. Very rocky start on the AT but moderate after that; a couple of minor steep areas, mostly rolling elevation changes. There are several nice viewpoints along this figure-8 loop. (The loop could be done in the opposite direction, but then the easier trail… This loop takes in the Bare Rock Trail, an overlook of Greenwood Lake, 360 degree views from a fire tower, plus a few other viewpoints.

You can also check out the Sterling Furnace remains. Sterling Forest is just over the NJ-NY border in New York, to the west of Harriman State Park.

Back in June I mentioned that I wanted to give back some labor after seeing a chain gang out there working on that hot and humid Saturday. Well today was that day (minus the hot humid weather!)

After I completed my NJAT hike in September I contacted the NYNJTC about volunteering for some work, and - once you offer free labor, you start getting emails. The West… The forecast said “partly cloudy”. The radar map showed no precipitation anywhere nearby. We figured the fog that loomed in the distance halfway on our drive there would burn off as the morning wore on.

It wasn’t raining, but the fog had made the downed leaves wet enough to be slippery and this only got worse as the… 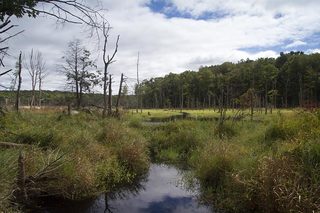 A longish ‘lollipop’ loop through Wawayanda’s scenic forest, rhododendron tunnels, and cedar swamp… plus an encounter with a pair of black bears.

Wawayanda is a really gorgeous park with an extensive network of trails. This loop skips the usual trails around Wawayanda Lake. It doesn’t offer any big viewpoints or an obvious destination – it’s just straight-up nice hiking through a very pretty forest.…

I originally planned to head out to Sussex County (10/5-10/6 2013) for Millbrook Days with my Old Man and tent overnight at Worthington but with the Fed shutdown causing the cancellation of Millbrook Days and closing down Old Mine Road we decided to check out Raccoon Ridge and Swartswood SP instead.

A weekend in Harriman

So we left in a fog on Saturday morning – and the weather wasn't so great either. We have been making an effort to get to the east side of the park where the trails are new to us. We parked off Rte. 202 in Ladentown at the trailhead of the Tuxedo-Mt Ivy trail.

Headed out to do AT - DWG to Greenwood Lake

Hitting hotel in DWG, PA tonight and getting started at 6am tomorrow. Goal tomorrow night is Catfish tower (about 12-13 miles). Hope to hit Greenwood Lake Next Saturday.

All my stuff - minus some food I mailed to High Point.… 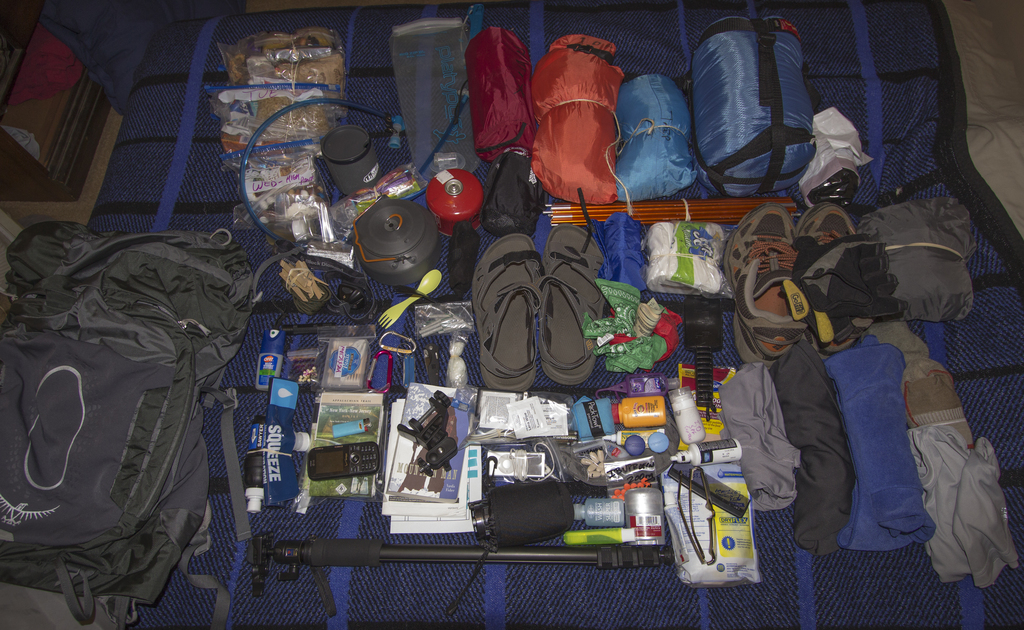 Video comp of my outdoorsy summer here in Jersey Rugged loop in Norvin Green State Forest that includes a waterfall and several expansive views, including the NYC skyline on a clear day.

We decided to skip out the Friday before Labor Day weekend for a quick-ish hike at Norvin Green, one of our favorite parks in Jersey. There are great views combined with some of the most rugged and remote-feeling trails in the state.

To change things up, we decided to start from a trailhead we never had before - the… 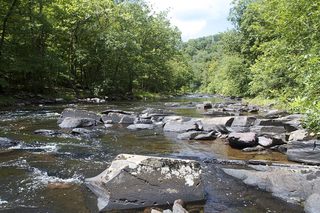 Two adjacent parks that pack dramatic vistas and pretty forest into a short hike along the High Rocks cliffs overlooking the Tohickon Creek below.

I headed out to Harriman (via the train) on Saturday 8/24 intending to do a 13-15 mile overnight loop again. Met some fellow hikers (June and Nilly) on the train out of Secaucus and we started talking about different spots in Harriman, hiking equipment,  etc. Well turns out we got so caught up in our conversation we missed our train stop! Once we realized our dilemma we asked the conductor and she advised that if we got off we’d have to wait until 3 o’clock for a train going back in the…

I decided to push and get to the shelter so I could get the pack off, tent up and look for water. The Conklin (White) hit the Yellow (Suffering Bear) and I quickly turned right.

The map showed another ‘Egg” over here. At this point I’d had it with the &*%^ eggs at Harriman! Twenty minutes later, and I was yet to see anything that looked like an “egg”.  Forty minutes later and I was somehow in a swampy area cursing to myself -  definitely  the lowest I’d felt out…

I cheated on our lovely garden state, and crept just over the border to Harriman for a 14 mile overnight loop on Saturday 7/27/13. Took the train from Rahway up to Tuxedo and started hiking around 10:45am, with the NYC crowd. Other than a previous excursion up to the Bear Mountain a few years back, I’ve never explored Harriman, and really had no idea what to expect. My goal was to hike 7-8 miles to Stone Memorial Shelter and return Sunday, hopefully in time to catch a 12…

Wanted to do the Appalachian Trail to Sunfish Pond. Ended up doing a loop over Mt Tammany and back to the car. It was fun.

I saw a couple deer. I saw the first at the start of the trail. It bolted quickly. Was up close to the other. I saw her at the top of the mountain. She didn't even seem to care that I was there. I was about 20 feet away. I took a few photos.

The NPS map I have for the Delaware Water Gap National Recreation Area sucks. I wasn't exactly sure… 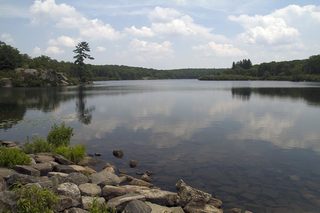 We took a day off during the week and figured we'd hit up a popular hike that is normally quite crowded on weekends.

Harriman State Park is packed with excellent hiking trails but everyone tends to start from the Reeves Meadow Visitor Center so that area gets mobbed.

We took our usual route on RED towards the lake and then circled around it, including taking a break out…